Manzanilla and Fino: Differences and similarities

What exactly is a Manzanilla and a Fino? Basically, the preparation is the same, Palomino grapes from the Sherry wines area and subjected to a biological ageing period using the solera and criadera method. The main difference is where the winery is located. If it’s a wine that has been aged in Sanlúcar de Barrameda, it will be labeled under the DO Manzanilla Sanlúcar de Barrameda, and if it has been aged in a winery mainly in Jerez, you will fall under the DO Jerez. 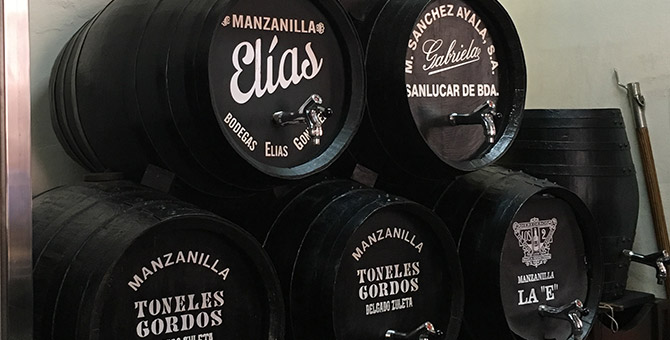 Then why is there such a differentiation? Because of the influence of the location of the wineries. In Sanlúcar many wineries are a few metres from the mouth of the Guadalquivir, highly influenced by the winds and humidity from the Atlantic. Whereas the town of Jerez and its wineries are 8 kilometres from the Atlantic, and therefore the marine influence is less. The microclimate that exists in the two municipalities is therefore a differentiating factor in the ageing process, resulting in different styles of wine.

The microclimate of Sanlúcar makes the yeast membrane covering the barrels thicker and it is rarely lost, giving rise to a more constant and subtle ageing. For this reason, Manzanillas tend to be softer, more elegant, golden in colour and with a more marked salty touch than their neighbours from Jerez.

Whereas in Jerez, the lesser influence of the Atlantic makes the temperatures fluctuate more abruptly and the humidity is not so noticeable. This directly affects the yeast membrane, making it thinner, and even, during especially hot or cold periods, resulting in almost all the membrane being lost. A Fino will therefore have sharper aromas, with hints of nuts and more structured on the palate, and warmer and less salty than its Sanlúcar neighbour.

Therefore, there are, indeed, differences between a Fino and a Manzanilla. But the most important thing is to try them and drink them, since they are great white wines that are complex and sapid.