The wines made in the region of Jerez (Fino, Manzanilla, Amontillado, Oloroso, Palo Cortado) are wines that are unique in the world. Unique due to their processing conditions. Unique due to the peculiar ageing to which they are subjected and for the unique qualities that this gives them. 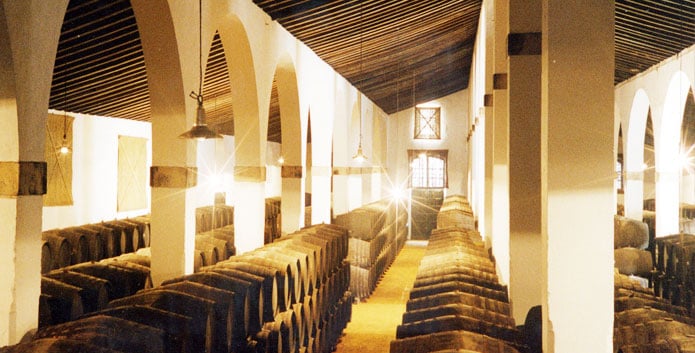 They are wines produced in what we know as the “Marco de Jerez” and are protected under two designations of origin: the D.O. Jerez-Xérès-Sherry and the D.O. Manzanilla – Sanlúcar de Barrameda. These two denominations refer to where the winery is located. The vineyards extend over different municipalities of the province, but the Bodegas de Crianza in the case of the D.O. Jerez-Xérès-Sherrycan only be located in the so-called  Sherry Triangle formed by the cities of Jerez de la Frontera, El Puerto de Santa María and Sanlucar de Barrameda, and in the case of theD.O. Manzanilla-Sanlúcar de Barrameda the ageing can only be performed exclusively in the city of Sanlucar de Barrameda.

All the types of wine, the Manzanilla, the Fino, the Amontillado, the Oloroso and the Palo Cortado have the same origin. All of them are made from grapes of the Palomino variety, and it is the criterion of the winery’s oenologist that will establish whether a must is destined to end up as one or another type of wine. From the must the winemaker makes an initial decision: either the must is destined to undergo ageing under the veil of flor, a priori to obtaining a Manzanilla or a Fino, or is destined to undergo oxidative ageing in order to obtain an Oloroso.
It should be clarified at this point that Manzanilla and Fino refer to the same type of wine, with the only thing that differentiates them being the place where they are made. Fino refers to wines made in Jerez and Manzanilla to those made in Sanlúcar.

Manzanilla and the Fino are fortified up to 15 % vol. and age in casks under a veil of flor, a veil of yeasts that protects the wine from oxidation and gives it special organoleptic characteristics, for a minimum period of 2 years. They are characterised by their straw yellow colour and their pungent and delicate aromas. Manzanillas can only undergo ageing in Sanlúcar de Barrameda and the Finos can undergo it in the three cities in Marco de Jerez. There is also the sherry known as Manzanilla Pasada, with a more prolonged ageing that gives the wine more structure.

For its part, Oloroso is a wine that has been fortified up to 17 % vol. and that, due to the structure that it displays from the outset, has only been subjected to oxidative ageing in casks in the traditional system of criaderas and soleras. The wine becomes dehydrated with the passage of time in casks, and gradually gains structure, smoothness and complexity.

Amontillado is a wine that has been fortified up to 18-20 % vol. and has been subjected to ageing under veil of flor but has then undergone oxidative ageing. Due to its characteristics, we can situate it between a Fino and an Oloroso. Its name comes from the fact that they are mainly produced in the Montilla wine region, but they can also belong to the D.O. Montilla Moriles, the D.O. Jerez-Xérès-Sherry and the D.O. Condado de Huelva.

Palo Cortado is a wine that has started out as a Fino, but soon after starting the biological ageing the wine is considered optimal for being a Palo Cortado, is fortified again and goes on to undergo oxidative ageing. It combines the subtlety of the Amontillados and the roundness and full-bodied structure of the Oloroso.

Sherry wines are unique wines, wines that are complex and rich in nuances. From the sharp and intense Finos to the complex Amontillados. Which of these do you love most?