Scottish? American? Japanese? Irish? Indian?... With or without "e"; whisky or whiskey... Regardless of where it comes from or how it’s written, what’s clear is that whisky is the king of cereals and one of the most valued drinks on the planet. Its nuances and flavours are so diverse and give rise to so many examples and variety of categories that whisky is a world to discover in itself. Would you like to find out more? 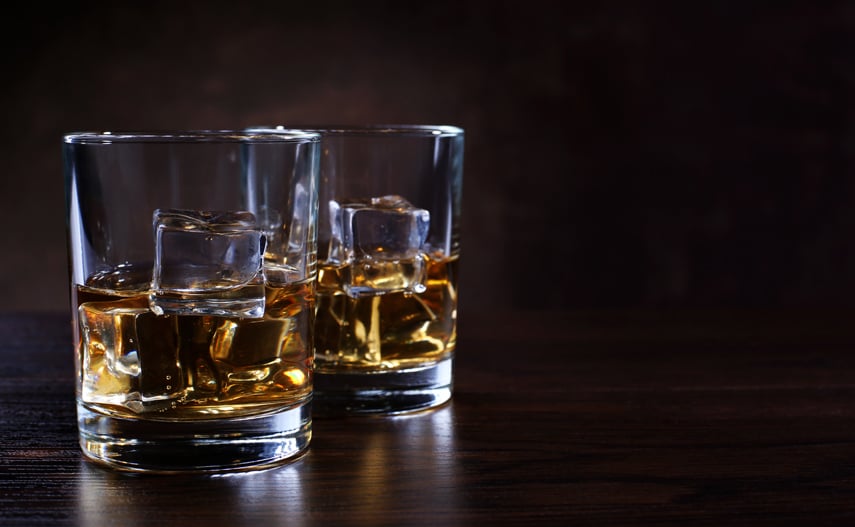 But what is whisky?

Whisky is an alcoholic beverage made from a fermented cereal paste (fermented malt) mainly barley, but which can also be corn, rye or wheat, distilled and aged in barrels.
It sounds so simple, but you'll see how the story gradually becomes more complicated as the basic raw material varies depending on what’s harvested in the place where the distillery is located.

Whisky, the "water of life"

Whisky came into being in Ireland, where the Celtic culture already knew how to distil barley and rye. The product of this distillation was considered a gift from the gods, capable of reviving the dead and warming for the harsh winter. That’s why in Gaelic whisky was called "Wisge Beatha" which means "water of life". The first writing to mention the drink dates from 1405, but whisky had been distilled by monks since the twelfth century and from Ireland it crossed the sea to reach Scotland, a place which has become the homeland of whiskey.

Malting: the soul of whiskey

The malting process is essential for making a whiskey.

Just like in winemaking, yeast has to consume sugar to generate alcohol. In this case, the sugars come from cereals, rather than fruits such as grapes, and are present in the form of starch which is more difficult for yeast to digest.

Malting is the conversion of these starches into sugars that are more easily digested by the yeast and which is obtained by creating a warm, humid environment where the cereals begin to germinate. At this point, the cereals are heated so they stop growing (barley is best for this process) and they’re dried through toasting.

Toasting requires heat, which is usually achieved by burning peat, which is a naturally occurring fuel found in wet areas and gives whiskey its characteristic smoky flavour and aroma.

The dry and toasted malt obtained from the above process is milled and mixed with hot water and gives rise to a kind of must known as wort, to which yeast is added to make fermentation possible. Fermented wort is called wash and this is the liquid that finally goes through distillation and is then aged according to each distillery.

Scotland, the home of whiskey

Ireland is known as the birthplace of whiskey, but it’s in Scotland where it has achieved its greatest splendour. Whisky must be aged in oak casks for a minimum of three years to obtain its classification and Scotland has ideal climatic conditions for long ageing. Its low temperatures contribute to the fact that the "angels' share" is lower than in other regions. In Scotland there is a phrase that says: "today's rain is tomorrow's whiskey" and water, a fundamental component in the production of whiskey, is so abundant and so good in the region that it’s not surprising there are so many distilleries which produce high quality whiskeys.

And, now we’ve mentioned it, do you know what "the angels’ share" is?

Whiskey is a drink with a high alcohol content and, while it rests quietly in casks during its ageing, some of it evaporates naturally through the porosity of the wood and escapes into the air. The makers say that "it's a kind of sacrifice to the heavens because by giving the angels their share, they ensure that the whiskey turns out as well as possible when bottled". A romantic way of accepting this loss, which may amount to 40% of the volume of a whisky by the end of a 20-year ageing period, for example.

The presence of the "e" is common in Ireland and the United States, on the other hand, whisky made in Scotland doesn’t have an "e", nor does any other single malt whisky made in places such as Japan, Sweden or India. But more important than how it’s written is what each bottle actually contains.

Single malt whisky is the world's best known whisky and is made with only three ingredients: water, barley and yeast.

In Scotland there are six areas which make pure malt whisky: Islands, Campbeltown, Highland, Islay, Lowland and Speyside. Some of these whiskies are made with peat-smoked barley, a feature liked by some people like but not so much by others.

If you appreciate this smoky and sometimes medicinal taste, choose whiskies from the islands of Islay, Skye and Orkney or brands such as Laphroaig, Ardbeg, Talisker or Highland Park.

If you prefer pure malt whiskey without smoky notes you can find great examples among the brands Glenfiddich or The Glenlivet, the best-selling brands in the world which have whiskeys with lighter notes of fresh fruit and a malt flavour which is sweeter and more pleasant on the palate.

Blended whiskey or grain whiskey is a product of the mixture of pure malt whiskeys with grain whiskeys (made with other cereals) and has a lighter and sweeter flavour than malt whiskey, which also happens to be scarcer and more expensive. Blended whisky is a whisky that should not be underestimated because it allows large pure malt distilleries to reach a wider audience and also offer a product which is easier to drink. Great examples are the brands Chivas Regal, Cutty Sark or Johnnie Walker, which is the best-selling Scotch whisky brand in the world.

Ireland had an interesting whiskey production but this was affected by the dry law. Nowadays, production is making a comeback through small distilleries distributed all over the country.

There are a few names that stand out, such as Bushmills distillery, located in the far north of Ireland, which makes pure malt whiskey. To the south is the Midleton distillery that produces several varieties of whiskey from different types of cereals and malted and unmalted barley.

One thing Bushmills and Midleton have in common is that their whiskey is distilled three times whereas in Scotland it’s only distilled twice. Triple distillation results in a lighter whiskey, which matures very well, is easy to drink and ideal for cocktails.

Japanese whisky has become a hit.  It’s been produced since the 1920s thanks to the enthusiasm of two people: Masataka Taketsuru and Shinjiro Torii, who managed to discover the secrets of Scotch whisky in order to make it in Japan. This gave rise to the first distilleries such as Yamazaki, now owned by Suntory, or Nikka.

They make pure malt whisky in Japan, with a fruity taste accompanied by notes of incense and spices, surprising flavours that can also be found with smoky peaty nuances, similar to those made in Islay, Scotland.

Among the blended whiskies, Hibiki or Nikka Whisky From the Barrelstand out. Nowadays, the quality of Japanese whisky is such that you can even find bottles as good or better than in Scotland.

Bourbon is a distillate considered to be 100% American, however its production has its origins in the distillation processes which were already used in Scotland, Ireland and Wales and that European settlers brought to the United States. These distillates began to be made in the county of Bourbon, hence its name and, unlike Scotch whiskey, it’s made from three grains: corn, rye and malted barley. This combination is known as "the grain bill" and is, so to speak, the recipe for the blend of grains that each distillery uses to give their distillates their particular hallmark.

By law, a bourbon must contain a minimum of 51% corn, which generates more alcohol but gives the distillate a particular sweetness.

American whiskey has given rise to great names in the production of this distillate such as Jack Daniel, who was descended from a Welsh grandfather and a Scottish grandmother.

Each distillery has its own "grain bill" and the magic happens when there’s a good balance: round, versatile distillates where you can even distinguish the contributions of each of the cereals chosen.

Whisk(e)y and the cereal revolution

This distillate is still in constant movement. There are already more than 20 countries where you can find distilleries that make whiskey (with or without an "e"). Whiskymakers who play with raw materials to stamp their own mark and who use cereals such as buckwheat, millet or quinoa and choose barrels with different treatments to achieve new nuances, innovating with new styles.

Which whisky is better?... As the writer Raymond Chandler said, "There is no bad whiskey. The are only some whiskies that aren’t as good as the others". Variety is the spice of life.