Getting to know José María Vicente, the winemaker who won Parker over

“The family is where it started. The land is the guide. Wine is my destiny.” A declaration of intent from José María Vicente, a self-taught winemaker who has become the producer of the first Spanish Mediterranean wine to achieve the much-sought-after 100 Parker points. 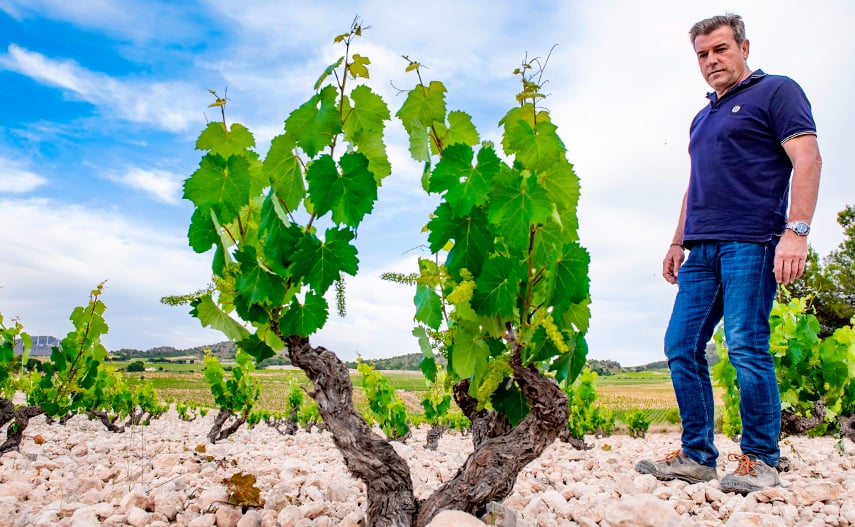 From the wisdom he has acquired over the years, from tasting wines from around the world, from travelling and visiting wineries, from sharing experiences with winemakers from other regions and driven by a great intuition and by a love and respect for his land, José María Vicente makes landscape wines at Casa Castillo, a winery in the D.O. Jumilla (Murcia) that is revolutionising the region’s wine scene and has managed to showcase the best qualities of the Monastrell variety to earn it a place at the most exclusive tables in the world. Let’s learn a bit more about José María Vicente, winemaker and owner of Casa Castillo, the Spanish Mediterranean winery that has won over Parker’s tasters.

- Do you have a special wine-related memory that has stuck with you and that you would like to share with us?

My first visit to France, to the whole area of the southern Rhone. I was surprised to see that Monastrell, called Mourvedre there, was considered a very noble variety with great aging potential. It made me rethink the situation about the supposed “improving varieties” that we were planting to help give a supposed complexity to the Monastrell and instead focus entirely on the study and development of our variety as the true protagonist of our wines.

- And, not being a winemaker by profession, how did you learn to make wine?

I have tried to surround myself with good and generous people who have taught me many things. Sometimes great winemakers have provided me with their knowledge, other times scholars have provided the theory and I have brought the practice. Intuition has also played an important role as well as trial and error. In the end, I think that Casa Castillo is a torrent that has been fed into by many different tributaries.

- Originally Casa Castillo was a farm growing wild rosemary. At what point did you and your father decide to turn to viticulture and also to a viticulture that was decidedly different from what was normal in the area? How was the switch from growing grapes to sell to others to deciding to make your own wines?

The step to produce our own wines was somewhat forced upon us. The estate was losing money growing grapes to sell to other wineries because of the low prices people were paying for them. That was when my father rethought the whole system and we took the leap: either we managed to add value by producing our own wines or the estate would be abandoned and turned into a desert. We didn’t like the industrial systems, both of cultivation and processing, that were so common in the area so we went looking for a new way. Firstly, through a more rational, sustainable and precise viticulture. This led to a higher quality grape that produced better wines of its own accord.

We have always thought that the biggest enemy of Monastrell is water, so for us irrigation has never been an obsession. And we have seen many families go broke looking for water, digging wells or changing the whole system to be able to irrigate.

Jumilla is a hard and semi-arid area but the soils are very good: deep, not very compact and with great retention potential. Dry farming is the most logical and respectful system for vineyard cultivation because it naturally produces concentrated, ripe grapes with a high alcohol content. These are the things that define Jumilla wine, the Mediterranean wine.

- Champion of Mediterranean wines. What did you do to attract attention and win over international critics? Is it a question of trends or is it true that things are changing?

Clearly things are changing, in fact I don't think that, in general, Mediterranean wine is in fashion. There is a high level of appreciation for some of the winegrowers/winemakers in this area, people who are well trained and have a great knowledge of their vineyards, their varieties and their soils. This, together with the precision in wine production and the constant search for excellence, is what has drawn attention to some of the wines produced in this area.

- We often associate Mediterranean wines with warmth, high alcohol and density. While it is true that some wines are like this, what else can we find in the Mediterranean? What is the key to creating a touch of freshness in your wines?

A new Mediterranean wine profile is being written with the help of increased knowledge and work in the vineyard. We have abandoned the obsession with colour and concentration to now work in search of a better balance. We have done away with the belief that “more is better” in favour of all the components of a wine being in harmony. Now we find much more clarity in our Monastrell variety, which is able to more clearly represent the landscape where the vines are planted. Finesse, elegance, smoothness and a refreshing drink are part of the vocabulary we would use to define Casa Castillo wines.

The feeling is wonderful and really nice. We already had the recognition of the industry, but achieving success through this wine makes all the hard work we have done in recent years worth it.

The aim was not so much to achieve a high score but to express the grapes that come from this old vineyard planted on ungrafted vines in the best possible way. It has taken us some time to understand and get to know this vineyard, so much so that we have even developed a close relationship with these vineyards.

- Nemesio, your father, was a great wine lover.  Your shared love and support have undoubtedly been a determining factor for you. You dedicated a wine to him, the Casa Castillo Cuvée N, an extraordinary tribute made from grapes from old vines. Unfortunately, he is no longer with us. What would you have liked to tell him now that you have achieved something historic with your wines, but that he isn’t here to see for himself?

He’ll be tremendously proud wherever he is. I’m sure this is one more thing that will help him rest in peace. This one’s for you, Dad!!!!

- How would you describe Casa Castillo Pie Franco, the extraordinary wine with 100 Parker points?

Strangely, this wine has nothing remarkable or noticeable for the senses: not much colour, not much concentration, not much tannin, not much alcohol... but it does have a commendable balance, it is pure silk. This is a textured wine.

- You once said that Jumilla was just waking up, that it had not yet found its own identity, which is why before all the winemakers wanted to be Casa de la Ermita and later all wanted to be Juan Gil (two great Jumilla winemakers). Do you think that now everyone will want to be Casa Castillo? How would you like the success of Casa Castillo to influence or inspire the winemakers of Jumilla and, why not, those of other small and still unknown wine regions of Spain?

It is challenging to be Casa Castillo because it does not respond to a particularly way of working or winemaking. Casa Castillo is a philosophy that starts in the vineyard and ends in the bottle. I have had many visits from winemakers who say that this is precisely what sets us apart from other wineries in the area. We have always been generous with the people who have wanted to learn from us (the same generosity we received from others). We are proud that there are new small winemakers who are inspired by Casa Castillo and we will always be ready to lend a helping hand.

- They say it’s hard to get there, but it's harder to stay there. For José María Vicente and Casa Castillo, what comes after 100 Parker points? What does the near future look like?

We have tried to relieve the pressure and keep our feet on the ground. The day the scores came out I stayed at Casa Castillo enjoying the moment with a good bottle of wine. The next day I was already thinking about the next vintage, 2021, which by the way is also extraordinary, and about making my team understand that we still have a lot to learn and work on. We think about the future and see a promising vision that we must achieve through effort, commitment and dedication.

- You are a great wine lover and have learned a lot from tasting, travelling and sharing experiences with other winemakers. Is there one particularly memorable wine that you have tasted that inspired you in what you wanted to do at Casa Castillo? What would we find in your own wine collection?

I am more inspired by a vineyard and a work philosophy than by a wine itself, as I have no interest in copying anything, rather adapting what I have learned to my environment. I am particularly partial to wines made from ungrafted vines, although I am not at all restricted to any area or style. In this sense, I could tell you about 3 bottles I have tried this year that, beyond their undeniable quality, make me reflect and enrich my way of understanding and looking at the vineyards and wines of Casa Castillo:

It is clear from these wines that my particular wine collection is diverse and has been changing over the years according to my drinking preferences, but in general, there are wines from all over the world with a special emphasis on Champagne, Chablis, Piedmont and Rhône.

- Finally, would you share with us one wine you tried recently that surprised you?

All Spanish winemakers who represent the other Spain, the Spain of the small producer in search of the best expression of their grapes, soils and landscapes. Fortunately, nowadays, there are many to choose from depending on the area:

Envínate, in several areas; Rodri Méndez and Zárate in Rías Baixas, Dominio del Águila in Ribera del Duero, Raúl Pérez and César Márquez in Bierzo, Comando G in Gredos, Javi Revert, 4Kilos and Ponce in the south; Willy Perez and Ramiro Ibáñez in Jerez and Sanlúcar... and so many others who are writing a new chapter in the history of this nation’s wine.