Serve at: 15.0°C
We recommend decanting

Scala Dei Cartoixa is a red wine from the D.O.Q. Priorat produced by Celler Scala Dei in the municipality of La Morera del Montsant (Tarragona).

Celler Scala Dei is a historic Priorat wine. In 1878 the first bottles of Priorat wine were dispatched from their facilities to the Universal Exposition in Paris. Almost a century later, in 1973, Scala Dei shifted their focus from marketing bulk wine to producing bottled wines.

Celler Scala Dei works with 90 hectares of their own vineyards, distributed in 40 different locations. All these plots are located at an altitude of between 400 and 800 meters, on different kinds of soils - slate, clay and calcareous - with all possible orientations due to the region’s unique terrain.

Scala Dei Cartoixa is a wine made with Grenache and Cariñena from old vineyards, more than 60 years old, planted between 500 and 800 meters above sea level, on the typical slate slopes of the Priorat.

After the manual harvest, each plot is vinified separately. The maceration is performed for about 3 weeks, fermenting each variety separately according to plots. The wine is aged for 18 months in different types of barrels, foudres and cement tanks.

Scala Dei Cartoixa 2016 is a deep, complex and elegant red wine. This vintage stand out on the nose with aromas of ripe red and black fruit, with a floral touch interspersed with clear mineral and spicy touches. On entering the mouth it displays volume, and is unctuous and mature with a very lingering finish.
Serious, intense and pleasant attack. In the mouth, the mid palate is excellent, unctuous and tasty. This wine has a acidity and really intense, defined acidity and integrated tannins, which turn out to be very agreeable. It is a wine with very juicy notes of fruit over an impressive mineral background. Long and persistent finish. Smoked and spiced aromas are noticed at retro-olfaction.

A high intensity red wine , with expressive aromas of very ripe black fruits, with toasted and spiced notes. Light floral nuances and mineral hints.
Intense and very enjoyable attack. A red wine with a powerful palate with an excellent, creamy, tasty and smooth mid palate. It shows very nice and intense ripe tannins and a good acidity. A wine with very juicy and mellow notes of fruit displayed on a powerful mineral background. Long and persistent finish. It is at an optimum moment for consumption but it can still be stored for 5 -7 years more.

Dark cherry red colour with violet reflections. A wine with a high robe and a dense, deep and intense colour.

Expressive aromas of very ripe black fruit, raspberries and plums. It shows floral notes, among which the violets stand out, mineral hints typical of the licorella and spicy aromas provided during the ageing. 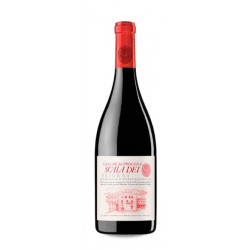