A terroir wine with a strong Sicilian character

Eduardo Torres Arenaria is an organic, wood-aged red wine made with a variety of native red grapes like Nerello Mascalese. Made by Eduardo Torres Acosta in the Sicilian town of Etna, this wine is classified as an IGT Terre Siciliane
Eduardo Torres Acosta is a winegrower who, after working in his father’s vineyards in Tenerife, decided to extend his training in Sicily under the guidance of great winegrowers like Arianna Ochipinti and Passopisciaro. These two years of training gave him the tools he needed to step out and begin bottling his own wines in 2014, and to open his own winery in Etna in 2018. Committed to environmentally friendly work in the vineyard and minimal intervention in the winery, his wines are characterised by being generous and full of life.
Eduardo Torres Arenaria comes from a plot lying 700 metres above sea level. These recovered vines are over 70 years old and planted in sandstone soils rich in minerals with marl, clay and quartz. The vineyards are mixed, growing various local varieties organically and completely by hand.
In the winery, the Eduardo Torres Arenaria grapes firstly undergo a 20-day maceration and then ferment spontaneously with native yeasts and without temperature control in concrete tanks. Finally the wine is aged in 500 and 600 litre barrels and concrete containers for 11 months.
Despite his “outsider” status, Eduardo has managed to completely master the terroir. Eduardo Torres Arenaria is a great example of this. A unique, limited production terroir wine with a strong local character.

Eduardo Torres Arenaria 2019 is a smooth red wine with aromas of red fruits, floral notes and mineral hints. On the palate it is deep, complex and generous. A wine with edgy, refreshing acidity and marked tannins. 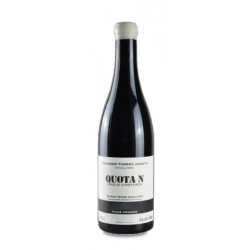