An enigmatic volcanic wine with a sweet sensation

Lanzarote is undoubtedly the most reminiscent of a lunar landscape on our planet. A magical island that is full of surprises, mainly because of the signs of recent volcanic activity. Between 1730 and 1736, the Timanfara volcano erupted and the island’s fertile land was covered with ash. An unexpected event that seriously affected the farmers as they were unable to recover their grain crops, but, as has been the case throughout history, they knew how to turn this problem into something positive. The people of Lanzarote began to dig the ground until they reached the fertile land, and although it was not used for growing cereals, some vines found their home in these holes. The holes were built with stone walls around them to protect them from the strong trade winds, and from then on, the creation of volcanic wines began. Enigmatic wines born from the impossible.

Centuries ago, at the foot of this amazing park in the centre of the island, there was a winery owned by one of the most prestigious families of Lanzarote in the 18th century. A disused winemaking project that was restarted in 2001 under the name Los Bermejos in homage to the reddish soils found under the volcanic ash and, in a short time, this winery’s wines became some of the most reputable on the island. One of their creations is Bermejo Malvasía Semidulce, a clear example of the wines made on this island. This wine is made from Malvasía grapes with a small amount of Muscat of Alexandria that grow under the effect of the Saharan haze and are harvested in small boxes to preserve their original state. In the winery they are cooled, selected and pressed whole. The Malvasía must is enriched with a small amount of the Muscatel grape must, and before alcoholic fermentation has finished and all the sugar has been converted, the must is cooled and fermentation is stopped, leaving the remains of natural sugars. Finally, the wine is not clarified and is kept on its fine lees for the whole of its resting time.

Bermejo Malvasía Semidulce was born through the casual but enigmatic combination of winemaking, varieties and terroir. A sweet and refreshing volcanic wine from the D.O. Lanzarote made not just to be sipped but to be deeply enjoyed.

Bermejo Malvasía Semidulce 2020 is an aromatic white wine with a complex nose of citrus, stone fruit notes and subtle floral hints. On the palate it is soft, juicy and smooth. A wine with some residual sugar that is seductive on the palate and very easy to drink. 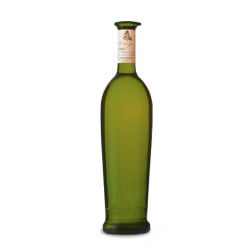