A sweet gem from Jerez

Palomino is the leading variety in the D.O. Jerez-Xérès-Sherry in southern Spain. However, this Andalusian denomination, one of the oldest in Spain, does not live by this white grape alone. The Pedro Ximenez variety is also known in this area (which forms a triangle between Jerez, Sanlúcar de Barrameda and El Puerto de Santa María) for its great wines like Ximénez-Spínola Delicado, a sweet wine produced by the Ximénez-Spínola winery.

At the moment, these wineries, which started producing in the 18th century, are unique in the Jerez region, because they are the only ones exclusively vinifying this variety, which arrived in Spain from Germany during the reign of Charles V. We don’t know for certain how this came about, but legend has it that it was brought to the Peninsula thanks to Peter Siemens, a former soldier of the Army or Flanders who gave his name to the variety which ended up becoming what everyone now recognises as Pedro Ximénez. Native to the Rhine and Moselle rivers, where slate soils predominate, Pedro Ximénez also thrives and is successfully cultivated in the albariza soils of the D.O. Jerez-Xérès-Sherry. This area, very close to the mouth of the Guadalete and Guadalquivir rivers, is spongy and rich in limestone, allowing it to successfully retain both rainfall (600 mm on average per year, mostly during the winter) and night dew (a direct influence of the Atlantic Ocean). So, when the heat rises above 40ºC in the summer months (between May and September), this soil allows the vine to develop a large root system that finds the necessary moisture deep down.

Ximénez-Spínola Delicado is harvested by hand, leaving the grapes lying on mats on the ground in the vineyard in alternating rows. This is known as “camadas” and the aim is to keep the grapes, at specific times, in the shade of the vines, avoiding continuous and direct exposure to the sun (as happens in some areas of Montilla-Moriles). This process, known as raisining, increases the sugar content of the grape by dehydration, condensing the berry’s natural fructose. Once raisined, the grapes are transported in boxes to the winery, where they are pressed at high pressures, achieving a very low yield: There are only 200 litres of must for each ton of fresh grapes. Once the must has been made during fermentation, the very unique feature of Ximénez-Spínola Delicado is that it ferments in French oak barrels with the bung open. This simple act ensures that the yeasts, as living organisms, have the oxygen they need to live and function, converting the sugar in the must into ethyl alcohol. This will change once it reaches 13% alcohol. The barrel is then capped, leaving it without air. This means the yeasts gradually die off without finishing their work. It should be noted that after raisining, the Ximénez-Spínola Delicado grapes come with very high levels of sugar that cannot be fully processed by the yeasts, making Ximénez-Spínola Delicado a naturally sweet wine, whose residual sugar and alcohol come directly from the grapes. It should be noted that this practice is not at all common in the area, where the custom or tradition is to top up the wines, achieving the desired alcohol and sugar levels by adding wine alcohol.

Details like this make Ximénez-Spínola a unique winery, where the focus is on quality (rather than quantity), with limited and numbered productions, where each one becomes a unique gem of the Jerez region. A true gem and a luxury from southern Spain.

Real reviews from customers who have purchased this product
25912 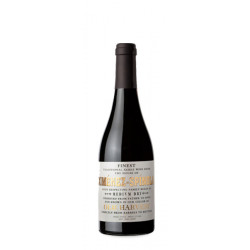 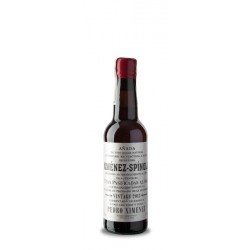 Authentic, rare and made with sun-soaked grapes 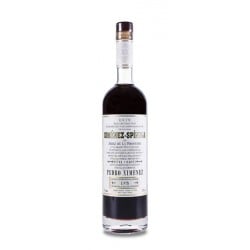