Get €0.92 added to your Decántalo Balance when you buy this product

The name Despagne is inseparable from A.O.C. Saint-Émilion, in Bordeaux. For more than four centuries, this family of tenant agriculturalists has been producing wines from the north of this appellation (located on the right bank of the Gironde). In this area, which was once Bordeaux's second largest wine trading centre supplying Europe, Louis Despagne bought the first plots of land in Corbin, which gave rise to Château Grand Corbin-Despagne. That happened in 1812. Today, François Despagne is the seventh generation at the head of this Grand Cru Classé in Bordeaux, where Château Grand Corbin-Despagne is made.

Château Grand Corbin-Despagne is the jewel in the crown. Specifically, it’s a red wine that comes from the 28 hectares of siliceous clay and ancient sands on clay which Château Grand Corbin-Despagne manages north of the A.O.C. Saint-Émilion, right next to A.O.C. Pomerol. The variety and richness of the soils, together with the temperate oceanic microclimate (with rainfall distributed throughout the year and hot dry summers), make Merlot, Cabernet Franc and Cabernet Sauvignon achieve high quality levels. The good condition of these typical varieties is also undoubtedly due to the work in the field, based on the principles of integrated and organic farming, where herbicides aren’t used.

When it comes to winemaking, Château Grand Corbin-Despagne begins with a manual harvest and a rigorous selection and sorting process that’s divided into four phases: in the vineyard itself (just before the harvest), during the harvest, before destemming and finally before vatting. The final balance is made up of different lots (according to the different plots) which will be vinified separately in temperature-controlled vats. Pumping over, punching the cap (treading) and délestage (a technique used during fermentation where the must-wine is racked and after a few hours returned to the initial tank) are the keys to the colour of Château Grand Corbin-Despagne. After maceration and devatting, the batches are blended and will be aged for 12 months.

The Grand Corbin-Despagne 2020 is a pleasant red wine. On the nose, notes of plum, blackberry pie, cedar chest, sandalwood and pencil lead stand out. It’s medium-bodied on the palate, with chewable tannins and hints of oak. Flavours of black olives and spices predominate. Long and persistent finish. 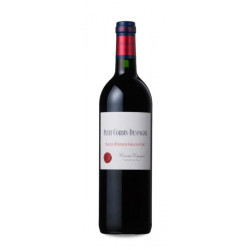