Wines from old vines are considered wines with soul. This statement is no coincidence, because wines made from vines older than 30 years are better than those made from young wines. There are many different reasons for this, but the main and most important one is that the vine has had enough time to adapt to the soil and climate. It’s like a wine glass keeping a photograph of the area where it came from.

This same spirit is what Bodegas Barbadillo wanted to capture with Barbadillo As de Mirabrás, a white made from old vines inspired by Mirabrás, the company’s other white that is fermented in sherry casks. Unlike its sibling, As de Mirabrás doesn’t touch wood and is made from selected vines from Miraflores, Añina, Macharnudo, Campix and Santa Lucía, in Jerez de la Frontera (Cádiz).

All these small plots of vineyards go a long way back, having been the birthplace of the best Cadiz wines for centuries. All of them grow the Palomino Fino variety, the true star of the area, which acquires unique and very specific nuances when cultivated on the albariza (porous and friable soil). Thanks to this soil, a large part of the rain that falls in Cadiz (and there is a lot of it) is retained. Surprisingly, and despite what people commonly believe, this Andalusian province records 600 mm of rainfall per year, much more than La Rioja (300-350 mm) or El Priorat (450-500 mm); however, the dry and hot summers tend to be deceiving, as this rainfall is mainly concentrated between October and April. The rest of the year the vines, under great water stress, are at the mercy of the Poniente, a cold and humid wind that comes directly from the Atlantic and which is essential for the correct ripening of the vineyards in the south of Andalusia.

Reaching the highest point is a great merit, but to continue to rise, getting new ideas and developing unexplored paths, is a miracle within the reach of a very few. This is how we can describe Barbadillo, one of the ten oldest family businesses in our country. It currently remains as the most dynamic winery in the Jerez setting. Here they investigate and create, but its old "soleras" also contain almost eternal relics that are an absolute challenge to the laws of longevity. Wines that are a compendium of power and aromatic complexity. 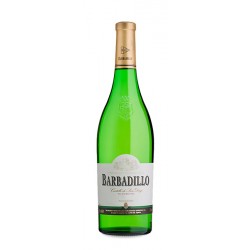