Cune Roble Ribera is a red wine produced by the CVNEwinery in the D.O. Ribera del Duero.

CVNE(Compañía Vinícola del Norte de España) is an old winery from Barrio de La Estación, in Haro. It was founded in 1879.

CVNE currently manages around 545 hectares, located in the subareas of La Rioja Alta, La Rioja Alavesa and in other denominations of origin. The vines where this winery gets the grapes to produce their wines are planted on clayey-calcareous, clayey-ferrous and alluvial soils, with a predominantly Atlantic climate.

Cune Roble Ribera is a red wine made from the Tempranillo grape variety from its own vineyards that are around 30 years old, at an altitude of some 800 meters, on clay-calcareous soils.

The preparation is traditional in stainless steel tanks with a cold pre-maceration. When the fermentation is complete, it is aged for 5 months in 2 year old used French oak barrels.

Cune Roble Ribera 2016 is a fruity, fluid and elegant red wine. In this vintage the aromas of ripe red fruit stand out over a very subtle toasted base note. On the palate it is lively and pleasant with a fresh and lingering finish.

The first wine made by CVNE 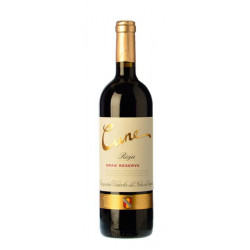 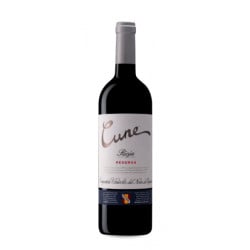 One of the most traditional Rioja wines

One of the most traditional Rioja wines