Discover the best wines produced from the D.O. Arlanza designation

Oficially recognised in 2007, the D.O. Arlanza is one of the latest DOs to be recognised in the autonomous community of Castilla y León, although viticulture in the region dates back to the tenth century. Today, the wines from Arlanza are modern, made predominantly with the region’s star variety, the Tempranillo (or Tinto Fino), where the terrain and climate of the region, as well as the meticulous care in all work carried out, ensures that the wines from Arlanza possess certain characteristics and nuances that distinguish it from the neighbouring Ribera del Duero region.

You are viewing 1 product 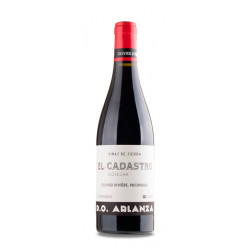 The D.O. Ribera del Arlanza is a wine producing region in Castilla y León with an extensive history and heritage linked to viticulture. There is evidence of winemaking dating back to the Roman times in the region of Lara, in the western part of the Sierra de Covarrubias, but its modern history dates back to the tenth century, with historical records of the existence of vineyards kept in the hands of the monasteries.

The first written evidence of wine production in this area comes from the 12th century, when the monastery of Santa María de Bujedo de Juarros purchased vineyards on the banks of the rivers Arlanza and Duero for their supply, completing them with vineyards in Quintanilla del Agua. In addition, priory monks of Santa Inés cultivated vines in the Lerma area, and in Covarrubias the wine was so good that it was enjoyed by neighbouring jurisdictions.
The height of their winemaking success took place towards the end of nineteenth century, when the region supplied wine to the city of Burgos and other towns in northern Spain.
This golden period soon came to an end in the early twentieth century, with the outbreak of phylloxera which devastated nearly all of the region’s vineyards. Replanting of the vineyards was completed in 1920, and by the middle of the last century, the vineyards were then an important part of all holdings in the region.

However, from the 1950s onward, there was a strong rural exodus from the region of Arlanza, as well as other rural areas, due to the great industrial expansion that demanded an abundant workforce. Workers were absorbed from agricultural areas that could not compete with the wages or living conditions of the industrial areas. This lack of manpower, combined with the structure of the vineyards (which were mainly small plots that prevented the use of machinery) and disparate, poorly adapted varieties, forced the gradual abandonment of the cultivation of vines, with many farmers resorting to the cultivation of cereal. Only a few plots were conserved for making wine for local families.

However, in the mid-1990s a group of wine enthusiasts decided to take the necessary steps to recover the winemaking heritage of Arlanza, with the region initially recognised under the “Vino de la Tierra Ribera del Arlanza" classification. This sparked new life into viticulture in the region, and the DO Arlanza was officially recognised in 2007.

The DO Arlanza is located in the north of Spain, just north of the DO Ribera del Duero, in the centre of the province of Burgos and around 40 kilometres from the capital. The region is situated in a valley, with the river Arlanza running through it (hence its name), from its tributaries to its confluence with the Pisuerga and the southeast of Palencia. The area is nestled between the Sierra de Covarrubias to the east, the Páramos del Cerrato to the west, with the northern and southern limits fixed on one side of the river Arlanza. DO Arlanza consists of 67 municipalities, 54 of which belong to the province of Burgos and 13 to Palencia. The region is currently home to 500 hectares of registered vineyards, 275 winegrowers and 23 wineries.

The DO Arlanza is home to a Mediterranean climate, less fresh in the east, losing moisture and gaining temperature as it advances westward. Rainfall varies from 800mm in the east to 500-600mm in the west. There is also the risk of frosts throughout the spring, while the dry period lasts 2-3 months in the east, and around 4 months in the west. The average minimum temperature during the coldest month (January) is around -10.3ºC, during which the plant is in full winter rest.

Regarding soils in the region, they are generally deep, with subsoils formed from soft rocks (limestone marl and disintegrated limestone which are penetrable by the roots). The relief of the region is varied with undulations and slopes, and vineyards are grown in the traditional way, on slopes or on hills to avoid problems with excess moisture. There is an abundance of sandy, siliceous and granitic soils, as well as those formed by limestone marl. Generally there is plenty of land where heavy elements are abundant. These can be either carbonates, limestone or alluvial pebbles and gravels. The lack of organic matter is an endemic feature of the soils of this area, which is very favourable for the quality of the vineyards.

There are a range of different authorised grape varieties to make DO Arlanza wines, including the white Albillo and Viura varieties, as well as the red varieties Tinta del País (Tempranillo), Garnacha Tinta, Mencía, Cabernet Sauvignon, Merlot and Petit Verdot.

Olivier Rivière arrived in Spain almost ten years ago, hired by Telmo Rodríguez, one of the great pioneers of Spanish wine in recent times. He began working for Rodríguez in La Rioja, but desire to produce his own wines soon led him to seek partners and allies to create his own brands. In 2009, he acquired some old vineyards in the DO Arlanza, planted between 1910 and 1940 around Covarrubias, over 1000 metres above sea level. From these vines, the winery produces 4 cuvées: La Vallada, made from a 2 hectare plot of young (15 year) Tempranillo vines, aged for 12 months in barrels and stainless steel tanks; El Cadastro, the result of a blend of plots situated between 950 and 1000 metres around Covarrubias planted between 1930 and 1950, where each plot (La Tisona, La Mula, Amesado, Los Lirios and El Quemado) is vinified separately for 2 years, until the final mixture, which is composed of 95% Tempranillo with a touch of Garnacha, aged for 24 months in oak barrels; El Quemado is made from a vineyard situated 1050 metres above sea level, and is home to the most extreme conditions, this wine is 95% Tempranillo with a touch of Garnacha, aged for 24 months in oak (10% new) barrels, with a production limit of 1000 bottles; then finally Basquevanas, a white wine that comes from a small old Albillo plot, is located on the outskirts of Covarrubias, aged for 12 months in barrels and 12 months in stainless steel tanks.

Pagos de Negredo is one of the pioneering wineries of the DO Arlanza. The vineyard, called Château Negredo, was one of the most important players in the viticultural history of Castilla y León in the nineteenth century, given its excellent geographical location and capacity to produce truly great wines. It is located in an impressive outcropping between rocky areas and holm-oak wood, 740 meters above the valley of Arlanza, in Palenzuela province of Palencia. Their latest wines launched on the market were the Quinta Negredo Rosado and the red wine Quinta Negredo Cuvée.

Bodegas Carillo de Albornoz was founded in 2012 in Avellanosa de Muñó, in the middle of the valley below the Arlanza River and its tributaries, and 45 km from Burgos towards the capital Madrid. This winery focuses on obtaining quality Tempranillo wines, both rosés and reds under the Carrillo de Albornoz label.