Fresh and pleasant with a sweet touch

Bodegas y Viñedos Juan Manuel Burgos was created in 1996 by Juan Manuel, although his ancestors were already dedicated to the wine industry. It was in 2000, after he planted new vineyards cloning the vines that his grandfather had planted, when the first AVAN crop was born.

The climate in this area is Mediterranean but with a continental character, marked by moderate-low rainfall, dry summers and long and harsh winters. We also have to point out the large temperature variations between seasons.

Bodegas y Viñedos Juan Manuel Burgos only applies natural treatments in the vineyards, which are guided by the phases of the moon. In the winery, the treatments are also natural, with a minimum addition of sulphur dioxide during the winemaking process. They are not adhered to the "crianza" or "reserva" of the regulatory body either, as they say that, each year, every wine needs its own ageing time.

Avan Tinto is a wine made from Tempranillo, from vineyards located at 900 metres of altitude, on calcareous soils with sand and clay.

Grapes are manually harvested and placed in boxes. Once they arrive at the winery, they go through a traditional winemaking process, with local yeasts for the fermentation and with low doses of sulphur dioxide during the entire process. The wine is aged for 12 months in oak barrels, 90% in French oak and 10% in American oak. 50% of the barrels are new and the remaining 50% are one-year barrels.

Avan Tinto 2016 is a thin, balanced and persistent wine. In this vintage, the aromas of ripe red fruit stand out, with an unusual freshness that makes it light and elegant. 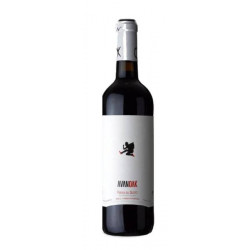