6 bottles delivery, only £11.34. Our prices are Duty Paid: VAT and ALL taxes included in the price.More information

An aromatic wine that is a living history of the D.O. Ribeiro

The church and wine have a relationship dating back a long way. This relationship, which is rooted in Christianity’s link between wine and the blood of Christ, has its origins in the Middle Ages, in the middle of the Reconquista.

Vines were much more than a simple crop. Those planted by Christians were a way of marking territory against Muslims, who were not allowed to drink alcohol according to Islam. Religious orders put in place legislation and measures that would allow them to cultivate vines. These orders worked and protected the vine and the wines.

In Spain, one of these bastions was the San Clodio monastery, in the Ourense town of Leiro (in Galicia), the main force behind the D.O. Ribeiro during the Middle Ages. In the shelter of this area lies Viña Meín, the winery currently producing Viña Meín O Pequeno Meín, a white wine made with this denomination’s traditional varieties.

The Viña Meín vineyards lie in the Avia valley, just on the left bank of the river it takes its name from. Here, the vines, growing on granite soil and terraces, are exposed to a microclimate that protects them from spring frosts.

The Viña Meín O Pequeno Meín grapes are harvested in several stages depending on the plot and the variety, with total care, listening to the grape and waiting for it to reach optimum ripeness.

When the grapes reach the winery, the Viña Meín O Pequeno Meín musts are made and at this stage, they are classified and fermented separately, depending on the area and the varieties, in stainless steel, oak or concrete tanks. Then the wine spends 10 months on lees and the coupage is made.

Viña Meín O Pequeno Meín is a living history of the D.O. Ribeiro. The best way to discover the roots of this denomination.

Viña Meín O Pequeno Meín 2019 is an aromatic and intense wine, made with Treixadura, Torrontés, Albariño and Godello. It has a nose of dried fruits. On the palate it is light and persistent, with a pleasant finish.

The most authentic expression of Ribeiro’s smallholding character 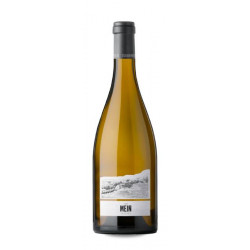