Martínez Palacios Crianza is a red wine from the D.O La Rioja produced by Martínez Palacios. Like the majority of wines from the Rioja region, this wine is made using only Tempranillo grapes.

The grapes used to make this wine are grown on vineyards that belong to the winery and are situated in the village of Ollauri. The harvest is carried out when the grapes have reached their optimal ripeness. They are collected in boxes of 400kg capacity and are transported to the winery with care as to avoid premature oxidation.

At the winery’s facilites, the grapes for Martínez Palacios Crianza are left to cold macerate for 3 days in stainless steel tanks with 180 hectreletres capacity. Subsequently, alcoholic fermentation takes place for around 1 week at a maximum temperature of 30º.

Following this, devatting takes place, which allowes malolactic fermentation to occur. Finally, before being bottled, Martínez Palacios Crianza rests in European and American oak barrels for fourteen months, during which racking takes place between two and three times, allowing the wine to oxygenate.

The Martínez Palacios winery was founded back in 1999 by brothers Miguel and Julio, who come from a family with a strong heritage in winemaking, dating back to the late nineteenth century.

Real reviews from customers who have purchased this product
5241

A flavoursome and velvety coupage 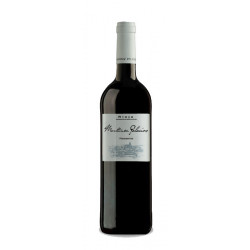