Fuentespina is the project of the Avelino Vegas family in the lands of Ribera del Duero. Despite its short trajectory in these latitudes, Fuentespina is already part of the modern and most recent history of Ribera del Duero. Its wines represent an clever way of understanding this land, where the red variety Tempranillo is its best business card. The greatest achievement that this company has had in a few years has been knowing how to increase the production of high-quality wines. Wines that win awards and recognition harvest after harvest. They are present in the whole of the national market and in over 35 countries around the world.

Fuentespina is a company run by the Avelino Vegas family. Avelino Vegas was born in a humble family and he was the youngest of 6 siblings. When he was just 18 years old, he was a soldier in the Spanish Civil War, in 1936. After the war, he worked for his older brother, who had built a small winery in Santiuste alongside other partners, selling bulk wines. In the 40s, Spain started to wake up after some very difficult years after the War.

In 1950, Avelino, who had already married Isabel, bought the small winery off his brother and he extended it to make wines with the Verdejo variety of the area. He sold the wines in carafes and wineskins in the surroundings of Santiuste. In 2008, Avelino Vegas opened a new winery in the same area. This winery was equipped with state-of-the-art technology to obtain quality white wines. The winery was designed and managed by Maribel García Vegas, an agricultural engineer who was the third generation to join the business. This family winery’s philosophy is to look towards the future, working in the present, without forgetting its past.

Wines Fuentespina, Montespina and Circe are distributed around Spain and in the main European and American markets, as well as the most important markets of the Asian continent, such as China, Japan and Korea. The group’s exports currently represent 30 percent of its production.

Avelino Vegas’ choice to make wines of maximum quality led the group to create Bodegas Fuentespina in 1993, within denomination of origin Ribera del Duero. To do so, the group acquired the cooperative Santísima Trinidad in the municipality of Fuentespina, in Burgos, now converted into modern facilities. The old parnters still supply the winery with the best Tempranillo grapes of the area. This way, Fuentespina directly manages 500 hectares of vineyards that are an average of 35 years old, with several plots planted between 1917 and 1945. The latter are the ones that produce the grapes used to make the winery’s higher range of red wines: Fuentespina Selección and F de Fuentespina.

The Fuentespina winery still has the greatness of the dimensions of the old cooperative facilities, adjusted to the 21st century. The entire production and ageing system has been invested in, to the point that the original winery is barely recognisable. However, they still preserve areas of the old winery, creating unique spaces with ageing and production rooms with ceilings that are over twelve metres high. When they bought Fuentespina not only did they buy the facilities, which have been extended in a significant way.

The transaction also included agreements to buy the grapes used by the hundred cooperative members to supply the winery. From the beginning, the 400 hectares of vineyard were the cornestone of a project that has continued to grow. The winery has agreements that entail the purchase of one million kilos of grapes in Fuentespina, another 500,000 in Milagros, and some smaller quantities in other villages of the surroundings. The amounts sum up to 3.5 and 4 million kilos of grapes that the winery vinifies in each vintage. Despite this large volume, the winery is designed to make the most of the grape and the large proportion of old vineyards they work with. To do this, the winery has divided its winemaking map into seven types of vines, including other varieties different than the Tempranillo. These grapes are received in two hoppers and they are vinified separately depending on the final wine.

Over the years, the winery is modifying the path of its production philosophy, changing the most classic feels to make modern and elegant wines. The first step towards this new challenge has been taken in the vineyards, selecting the grapes on site, by terroirs and age of the vines, with a limited production and low yields.

The ageing takes place in American oak barrels in the case of the younger wines, in American and French oak for the crianzas, and only oak from the Caucasus for high-end wines. These complement their stay in the barrels with another long period of time in the winery’s bottle rack. This winery has a large stock of barrels with 3,800 units.

Below is the list of wines made by the winery Fuentespina:

F de Fuentespina is made with a selection of Tempranillo grapes from the oldest vineyards of Ribera del Duero, aged in French oak from Allier and Nevers. It is made when the harvest is excellent and it is marketed in a bottle that is a replica of the original Burgundy ones, made using glass blowing in 1859 and sealed by hand like they did back then. On the nose, it is fine, elegant and intense, with spicy and mineral notes on a background of roasting and black fruit (plums and raisins). In the mouth, it is full, powerful, very concentrated and with very well polished tannins. It is well structured, unctuous and round, with a very long finish.

Fuentespina Granate is made with Tempranillo from vineyards that are 15 years old on average. It spends 3 months in American oak barrels. Aroma of fresh fruit, cherries and raspberries. In the mouth, it is fruity, tasty and powerful.

Fuentespina Roble 7 is a wine exclusively made with Tempranillo grapes from vineyards that are 50 years old on average. It is aged for 7 months in new American oak barrels. On the nose, it is very expressive. Notes of red and black fruit blend with shades of vanilla, dairy and roasting. In the mouth, it is powerful, pleasant, enveloping, very soft and with a long and fresh finish.

Fuentespina Selección is exclusively made with selected Tempranillo grapes from vineyards that are 50 years old on average. It remains in new French oak barrels for 16 months. It has aromas of ripe fruit, toasting, roasting, with notes of chocolate and toasted caramel. In the mouth, it is powerful, tasty, meaty and spicy, with mature tannins and a long and balanced finish.

Fuentespina The winery is located in the province of Burgos, starting its journey at the end of the last century particularly in 1994 when the union occurs between an ancient family cooperative Vegas. The obvious quality of the grapes is improved with modern facilities. Today should be noted that one of the leading wineries in the Ribera del Duero. 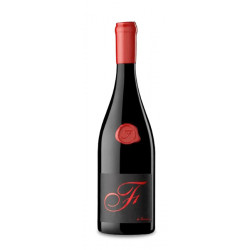 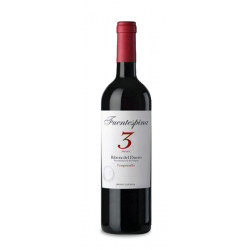 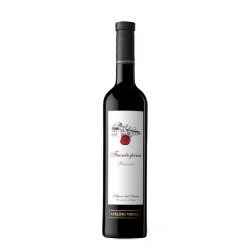 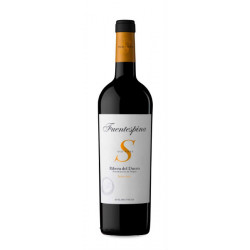