Campo Viejo was the name of the old winery in Aldeanueva de Ebro, a result of the collaboration of two wine growers and winemakers from this area of Rioja Baja, Bernardo Beristain and José Ortigüela. It was typical Rioja modest facility.
They say that the brand Campo Viejo takes the name of a place located to the East of the municipality of Villar de Arrendo. This place was frequently visited by Jose Ortigüela when he was a child. He also worked in the vineyards that were cultivated there. According to some, the name comes from the Latin campus veteranus, which would refer to an area of ​​land that was handed over to old Roman legionnaires as a reward for their military service.

The first wine from the winery Campo Viejo was born from the 1959 harvest, and it was produced in José Ortigüela's winery. Back in the day, he gave it to the farmers and wine growers of the area so they could use it for the cooperative. Also in 1959, the company Sociedad Anónima Vinícola del Norte (SAVIN) was created in San Sebastián. This company took over the production of the winery.
The first bottle of Campo Viejo (Vintage 1959) reached the market in 1961, and after a first trial stage, the true commercial launch of this wine would start from 1963. This is when it merged with the Union Vinícola Guipuzcoana to form the company S.A. Vinícola del Norte Savin, Ortigüela, Beristain and Cía., where the three main drivers of the company are already present: José Ortigüela, José Bezares and, above all, Juan Alcorta, a Guipuzcoan businessman who chaired, among other companies, like the oil company Koipe and the Savin group, founded in 1939 and dedicated to the marketing of a popular table wine presented in a returnable bottle.

Since his arrival in La Rioja, Juan Alcorta put José Luis Bezares, a Rioja winemaker from Haro, at the head of the winery. He would give the wines from Campo Viejo their character from the highest responsibility position of the winery, and then of the group that would be created around it.
He also began the construction of the new winery on the outskirts of Logroño. This winery would be put into production in 1969. Three years later the labels were changed and the famous image of the grape harvesting machines was introduced. This image would travel the world from 1975, year in which a shipment to Cuba started the export activity of the firm.

Campo Viejo was one of the brands that contributed the most to the consolidation of the topical image of the commercial Rioja, marked by the ageing in barrels. They introduced references such as fourth year, and it was one of the triggers for the regulation of ageing indications (crianza, reserva, gran reserva), established in Roja in 1980. Campo Viejo was the "Sunday wine" in the era of development, it defined a new style and it has remained an icon of the most popular Rioja wines.

The SAVIN Group continued to grow until in 1989, when it changed its name to Bodegas & Bebidas, it acquired the winery Vinícola Navarra, in 1994 Bodegas AGE, and in 1998 Bodegas Tarsus, in the heart of Ribera del Duero.
1998 would also be an important year for the company due to the construction of Bodegas Ysios, created by the prestigious architect Santiago Calatrava. In 2000, they founded Bodegas Aura in Rueda, together with the construction in 2001 of the new winery Bodega Campo Viejo .
With this change they also modified the name of the company, which was now known as Bodegas Juan Alcorta, and Campo Viejo remained as a trademark of the corporation that had appeared surrounding its first wine. This same year, the company Bodegas y Bebidas is acquired by Alled Domecq, and four years later it is transferred to the Pernod Ricard Group, a world co-leader in spirits and wines, changing its name to Domecq Bodegas. Since July 2010, Pernod Ricard Bodegas has been an active part of Pernod Ricard Winemakers (formerly Premium Wine Brands), based in Sydney (Australia). Within the Pernod Ricard Group it is the entity specialised in the production and distribution of quality wines all around the world, which also includes Orlando Wines - Jacob's Creek (Australia), Pernod Ricard New Zealand (Brancott Estate), and also the brand Graffigna, by Pernod Ricard Argentina.

The new winery of Campo Viejo, opened in 2001, replacing the old one from 1967, is located on the outskirts of Logroño. The winery has an excellent location, on top of a hill in the surroundings of Logroño, very close to built areas, but in a fully rural environment, with vast vine crops. The top of the hill is flat, like a plateau. It is also covered with vineyards (a small part of 1,900 hectares that supply the winery) and has great views of the Sierra de Cantabria, the Ebro valley and the capital of La Rioja itself.
In it stands the modern building designed by the Riojan architect Ignacio Quemada, disciple of Rafael Moneo. It is a masterpiece buried more than 20 metres below the ground, which gives it suitable conditions for the ageing of wine. The buildings themselves are two modest constructions, with straight lines and a light colour, with façades covered with carved stone and some wooden elements. The actual "body" of the winery is underground, inside the mountain, just like the olden caves, according to oenological and architectural criteria.
On the one hand, the grapes and the wine move by gravity throughout the entire production process, and the ageing rooms have natural conditions similar to those of the traditional caves. On the other hand, the construction goes almost unnoticed from the outside, barely altering the landscape.

Under the ground, the winery has incredible dimensions, which place it among the largest ones in Europe: 38,000 m2 of surface; rooms of up to 16 metres high; 327 steel deposits with a total capacity of 30 million litres; 70,000 American and French oak barrels gathered in a single space, and a bottle rack that can hold six million units. All of this to produce around 20 million litres per year of crianza, reserva and gran reserva wines, with the brands Campo Viejo, Alcorta and Azpilicueta. In short, state-of-the-art architecture, precision engineering and 21st-century oenology are combined in this wine cathedral that perfectly synthesizes the best Riojan tradition with modern quality requirements.

Her right-arm women is Clara Canals, born in Tarragona in 1982. However, in 1984 her family moved to Logroño, where she grew up. She has a degree in Biology and Biochemistry from the University of Navarre, and a Master's Degree in Oenology, Viticulture and Marketing. She also has a wide international experience in wineries of Australia, Argentina, California, France, New Zealand and South Africa. Since 2011 she works at Bodegas Campo Viejo under the leadership of Elena Adell to create modern and innovative wines, specially designed to be enjoyed by younger people.

Campo Viejo produces the classic collection of Rioja wine styles, with the Blanco Campo Viejo, dry, made with Viura, Verdejo, Chardonnay and White Tempranillo, where 10% of the wine is aged for 3 months in new American oak barrels. A wine of intense flavours and refreshing aromas of white fruit.

Campo Viejo Blanco SemiDulce, made 100% with the Viura variety and with an ageing of 18 months in barrels, mostly of American oak over French oak; a soft wine, delicately sweet and refreshing at the same time.

Campo Viejo Rosado, with 100% saignée Tempranillo, aged on its lees for two months; with aromas of fruits, strawberries, plums and blackberries, with floral touches of roses and violets, and a fragrant, round, soft and delicate palate.

Cava Campo Viejo Brut Reserva, with Parellada, Xarello and Maccabeu, and 18 months of ageing in stacks; fresh, well-balanced and elegant on the palate, with an excellent fresh finish. Cava Campo Viejo Brut Rosado, made 100% with Trepat and 9 months of ageing in stacks; pleasant and powerful on the nose, with an intense presence of ripe red fruits, and a pleasant and round sensation on the palate. With a lingering aftertaste.

Campo Viejo Ecológico, an innovative wine from 100% organic production, respectful with the environment that surrounds it, and that reflects Campo Viejo's commitment towards the environment.

Campo Viejo Crianza, with 85% Tempranillo, 10% Graciano and 5% Mazuelo. Aged for 12 months in American and French oak barrels. It is a classic of the brand, which combines softness, velvetiness and elegance.

Campo Viejo Crianza Vendimia Seleccionada, 100% Tempranillo and an ageing of 18 months, with American oak prevailing over French oak. It is a wine that is born from the mixture of plots; concentrated and complex, it encloses the features of fresh fruit of La Rioja Alta and the structure of La Rioja Baja, combined with the character of La Rioja Media.

Campo Viejo Reserva, with 85% Tempranillo, 10% Graciano and 5% Mazuelo. Aged for 18 months in American and French (50%) oak barrels. A red with a great balance between the fruit (cherries, black plums, ripe blackberries) and the clear nuances from the wood (clove, pepper, vanilla and coconut).

Campo Viejo Gran Reserva, with the same coupage as the reserva, but with 24 months of ageing in French (80%) and American (20%) oak barrels. It offers fruity aromas of ripe red fruits, such as blackberry, blueberry and black plums, extraordinarily well balanced, with a sweet taste that fills the mouth, with sweet and refined tannins, and a long, elegant and perfumed finish with final touches of coffee with chocolate.

Dominio Campo Viejo, with 90% Tempranillo, 5% Graciano and 5% Mazuelo. 6 different individual vinifications are made from the 5 plots of land, and they aged for 11 months in French oak barrels from two forests of Troncais and Bertranges. It is an icon of the progressive Campo Viejo style, where attention to detail and the search for excellence make Dominio its star wine. It is elegant, fruity, powerful and unbelievably complex.

A white with a Riojan personality and aromas 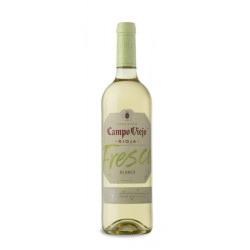 A Viura white wine for those with a sweet tooth 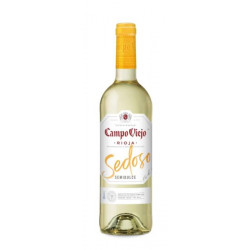 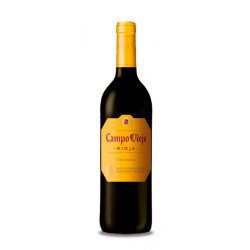 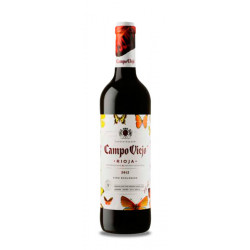 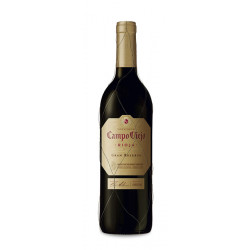 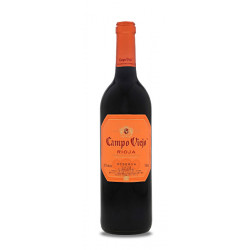 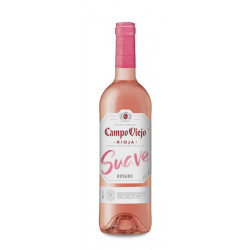 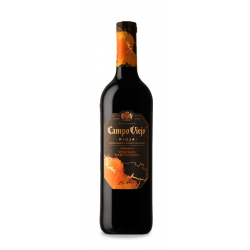 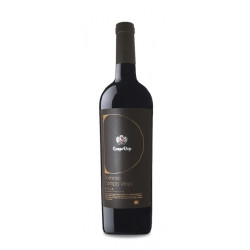 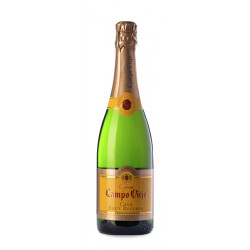 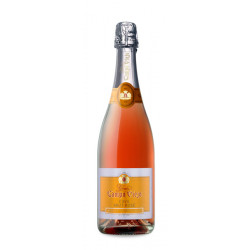