A Montsant with great fruity character

Les Sorts Sycar is a wood-aged red wine made by Celler Masroig with the Syrah and Samsó red varieties in the D.O. Montsant (Catalonia).
Part of the Montsant Denomination of Origin, Celler Masroig is the largest winery in the denomination. Founded in 1917 in the town of the same name, they have around 200 winegrowers and approximately 500 hectares of their own vineyards in Priorat, where they make wines with a strong connection to the landscape.
Les Sorts Sycar comes from vineyards in the southwest of Montsant. This wine is a blend of 50-60-year-old Samsó and 15-20-year-old Syrah vines planted in red clay soils. The low rainfall and high temperatures produce very concentrated berries and optimal ripening.
Les Sorts Sycar undergoes traditional fermentation in stainless steel tanks. Malolactic fermentation takes place in barrels without clarification and with a gentle filtration. Finally, the wine ages for 13 months in French oak barrels and then in the bottle.
Following the characteristic style of a Montsant, Les Sorts Sycar is a coupage of native varieties with a great fruity character and well-integrated wood.

Real reviews from customers who have purchased this product
17667

Les Sorts Sycar 2018 is an aged red wine with intense aromas of red and black fruits, spicy notes and hints of chocolate and tobacco. On the palate it is powerful, concentrated and well structured. It reveals mature tannins with a background of oak wood and a long and pleasant aftertaste.
This wine from the winery El Masroig has a soft and embracing attack and a silky and delicious mid palate. The notes of fruit noticed in the nose appear again with intensity along with outstanding mineral touches. Ripe and sweet tannins. Its wooden background gains ground and rounds out the wine. Long, lingering and very pleasant finish.

Intense aromas among which the notes of ripe black and red fruit, almost jam, take centre stage. The fragrant violet flowers and the notes of spices, minerals, herbs and chocolate round out this complex wine. The good background of wood, toasted notes and cream harmoniously accmpany all these notes.

Founded in 1917, this is one of the most important wineries in the Priorat country. It encompasses approximately 500 hectares of vineyards, all under the Montsant Denomination of Origin, and is one of the largest wineries within the DO. 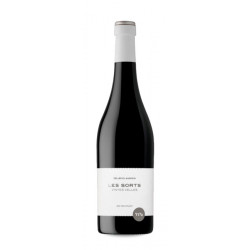 Rojalet red in a box 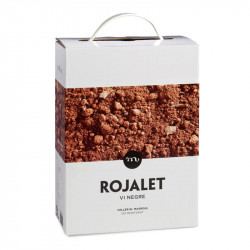 An aged Bag in Box 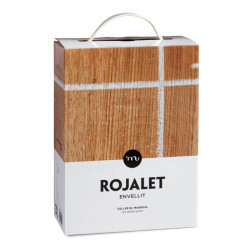 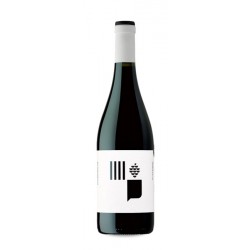