Jardins Rosat is a wine made fromTempranillo, Carignan, Merlot and Syrah.

Once the harvest arrives at the winery and after a very slight saignée, the flor must ferments in stainless steel deposits at a controlled temperature of 15ºC.

Jardins Rosat 2018 is a fruity, soft and elegant wine. The aromas of red fresh fruit stand out, with white fruit and a slight citric hint. In the mouth, it is fresh and pleasant. 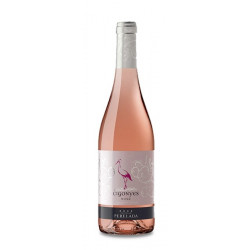