Briego Fiel Edición Limitada is a red wine from the D.O Ribera del Duero produced by the Briego winery. Like many of the wines produced in this region, it is made exclusively with the Tempranillo (100%) grape variety.

All of the grapes used for to produce this wine come from the same vineyard: La Nava. Briego Fiel Edición Limitada is a signature wine, made with grapes taken from vineyards situated 900 metres above sea level, in the small town of Fompedraza, a small village in Valladolid with a viticulture tradition within the D.O. Ribera del Duero. This family business currently has 77 hectares, all producing Tempranillo, with the exception of a nominal percentage of Merlot.

The winemakeing process for Briego Fiel Edición Limitada is carried out using conventional and traditional methods, drawing on the years of experience of the region. Before being placed onto the market, the wine is aged for 20 months in French oak barrels. We recommend that you decant the liquid around 15 minutes before enjoying this wine.

The first vintage of Briego Fiel Edición Limitada was released during the 1992 vintage. The structure and size of the winery has since increased and improved, gaining real recognition from 1994.

Bodegas Briego is located in Fompedraza, a small village of the region of Valladolid, where the winemaking is a tradition. The Benito Hernando brothers (Fernando, Gaspar and Javier) are the owners of Bodegas Briego and the ones responsible for retrieving the vinicultural family tradition. 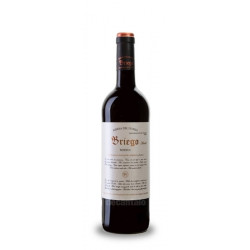 A very good choice for those who love Ribera del Duero

The freshness and silkiness of an aged Tempranillo