If anyone knows how to sell a country, it is Telmo Rodriguez. Here we are with one of the Spanish winemaking greats. With over a quarter of a century of experience, he has become one of the best in the world, with the ability to focus on quality over quantity better than anyone. All of his work can be summed up in one phrase: “the future is in the past.” A return to the beginning and an appreciation of what is on our doorstep. It is an honour to have you with us... 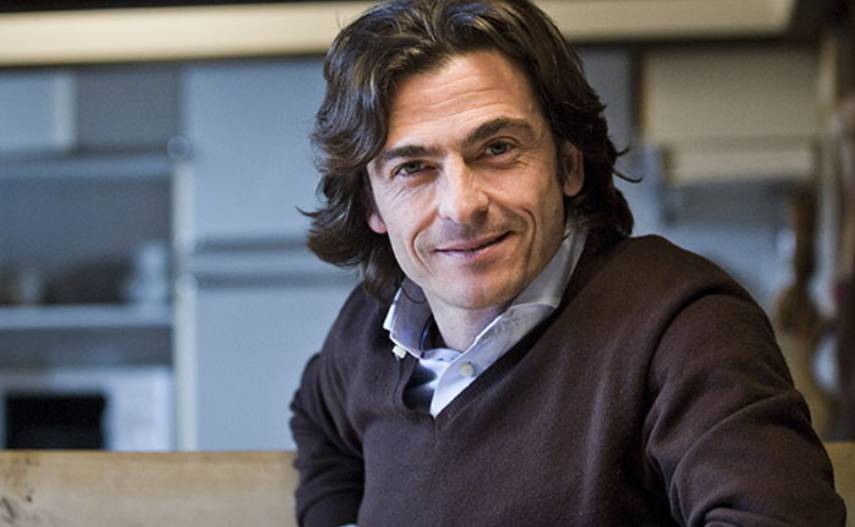 - You come from a winemaking family and wine has always been with you. What is your first memory of wine?

At Remelluri in the 70s, the grapes were almost always harvested in the snow. I will never forget when I was a child, seeing the old fermentation room where the grapes arrived so cold that they had to light fires to ferment them. It’s a bit of a horrific image, the big wooden vats in the middle of the fire and smoke. I’m sure that was my first strong memory of wine.

- Did you always know you wanted to spend your life working in wine? Or was there a time in your life when you felt the pull?

In reality, our parents never tried to direct us one way or another. I have a very eclectic family, with a mix of entrepreneurs and artists. We are from Irún, a town on the border. I started studying biology probably because I liked the sea so much. Wine was an intuition that would later become my profession. Maybe it was luck.

- You studied oenology in Bordeaux, worked in the Prats family cellars and then continued your training in the Rhone Valley with big names like Chave and Trévallon. What do you learn from that time? Do you think your wines would be very different if you had stayed at home to study?

It makes sense that if you want to work in wine, you have to learn from the French. You have to admit that France had the skills needed to transform an everyday product into something of a luxury. The most important thing for me was to meet great winegrowers and, above all, great people. They were the ones who really got me hooked in this amazing world.

- Bearing in mind that what you learned in France opened up a whole world of opportunities for you, once you returned to Spain and joined Remelluri, what was the easiest and most difficult part of joining in with the family project?

When I arrived in Rioja my father explained that we couldn’t make a great wine. He was convinced that Riojan consumers wouldn’t get it. I was very angry at first, but my father was probably right. Rioja’s great success was in making a lot of wine as cheaply as possible. We leave the American oak to lead the way in flavour. The vineyard and the taste of Rioja had already disappeared. I decided to move away from Remelluri and I had the opportunity to travel and see forgotten places. I came to understand that our country was very exciting and that we had to go in search of the vineyards that were disappearing; we had the most beautiful forgotten vineyards just waiting for someone to find them.

- Among your fellow students, Pablo Eguzkiza stands out. You’re friends and you work together. Together you embarked on your own adventure in search of micro wine-growing areas all over the country. What gave you the ability to believe in your own project?

I think our story is a lovely one. We met at the oenology faculty in Bordeaux and it all went from there. We have always worked together. We have gone through some difficult times, with nothing left, and sometimes without finding what we wanted, but we have always enjoyed ourselves, we have had a lot of fun. We are still planting in magical places, sometimes we think we can do anything, and we want to pass this on to the people we work with. Our project is simple and human. Now we have pretty much everything we need to be very happy.

- This is why you started Compañía de Vinos Telmo Rodríguez in 1994, to showcase the authenticity of the area and get back to basics. The result of this way of working is Alma, a Garnacha wine made at a time when it was considered a second-rate variety. What did it mean for you to choose to work with native varieties when what was selling were foreign grapes?

We have always gone against the tide. It's true to say that in the late 80’s early 90’s Spain wasn’t very exciting. The idea of progress was sold with French varieties, trellising and irrigation. We were lucky enough to be in contact with great viticulture. We learned from the heroic winegrowers who spent their lives protecting their vineyards. We have been working against the current for more than 30 years. I really think we've been very lucky, we can't complain. There are many extraordinary projects in our country run by young people. They are proving us right. The truth is that we can’t take much credit because everything we did was very logical.

- If your Compañía is known for one thing, it’s the search for micro-domains. From Ourense to Alicante, from Málaga to Burgos, from Ávila to La Rioja... Sounds like the term “driving wine-maker” is right up your street. How do you choose, or what are the clues that lead you to start investigating a particular area?

I don’t really like the idea of the “driving wine-maker” because that suggests someone who travels to make wines that are the same everywhere. It is true that we have travelled a lot of the country, although we always say that we are from the northwest; we like the idea of the northwest. Our work has involved going to different areas, getting to know them, learning about them, feeling out their landscape and adapting our knowledge and trying to explain the different tastes of the places.

- In 1996, when the market believed that Spain was a country of red wines, you launched Basa, a white wine from Rueda made with Verdejo and Viura grapes. What did such a daring feat mean for you?

Outside Spain we were certainly known as a country of red wines, even here, white wine was not appreciated either. We saw great potential in Rueda. We saw a large area with some very interesting varieties and tastes. Also when we started, we had no money, so we had no choice but to succeed very quickly. We are very grateful to Basa for everything it has given us. It is a simple, original, honest wine that has given a lot of pleasure and that has showcased the potential of our whites to many people from different countries.

- During all this time you have recovered a magnificent collection of vineyards in different areas of Spain. Great wines like Matallana, Lanzaga and Pago La Jara can attest to this. Have you ever thought about making wine abroad? If so, where would you like to try your luck?

When I came back from France it was clear to me that we should only work in our country. We have never imitated French wines. We admire them and drink them but here we are in an extraordinary country and there is a lot to be done here. Today we have 85 hectares of “grand cru.” To enjoy our work we don't need to go beyond our borders.

- Your wines come from different denominations:  La Rioja, Ribera del Duero, Rueda, Valdeorras, Alicante, Toro, Málaga, Cigales, Ávila. Although everyone is a product of their father and mother, Telmo Rodríguez wines must have some characteristics in common. Could you share any of them with us?

We have always tried to ensure that every wine we make is original, from the simplest to the most complex. I like it when people say our wines are honest, that they showcase where they come from and that they are enjoyable. Generally when we arrive in a place, be it Gredos, Rioja, Ribera del Duero... it takes us many years to make great wine. Pablo is a perfectionist. Not everything we do passes the test.

- In 2010 you rejoined the family winery Remelluri and together with your sister Amaya you are going back to the beginning in Rioja where a few different plots are showcased in a single wine. Is Remelluri Reserva an estate wine based on the old legendary Medoc Alavés? Could you explain what this term means?

The Medoc Alavés was surely the most beautiful story our vineyard has ever seen. It was an attempt to open the door to great wine in our country. Perhaps it was too soon and of course the attempt failed. Since the 19th century, Rioja has been marked by the concept of the merchant. Probably influenced by the wine merchants who came from France. I returned to Remelluri in 2010 with my sister in the hope that our generation would make the great wine of Remelluri. I’m sure my father would be proud of this. We think the market is ready. Remelluri is an extraordinary 14th century estate. We have all the elements to do something great. We have moved away from Rioja’s model of commercial success. It is now clear to us that we want to make less wine, to work more and to show everyone that great wine that is ready and waiting in our vineyards.

- We know from your work that you are a born traveller. With the small amount of free time you have between vineyards and airports, what do you like to do?

I’m still a man of the sea and there are lots of things I like to do.

- And finally, could you tell us about the last wine that captivated you?

For the last few years I have been buying more and more wines from young people in our country who are doing incredible work. I think with everything happening in Galicia, Bierzo, Levante, Rioja and Jerez, I am discovering how beautiful our country is. There is definitely a new generation who deeply love wine and who are going to discover something we didn't know about.