Marqués de Riscal, a visionary winery in Rioja and Rueda

The oldest winery in the D.O.Ca. Rioja and, also, one of the pioneers of the D.O. Rueda, Marqués del Riscal is best known for being the first winery in Rioja to produce wines using Bordeaux methods. They have been doing this for more than a century and it has made them one of the leading Rioja wineries across the world. 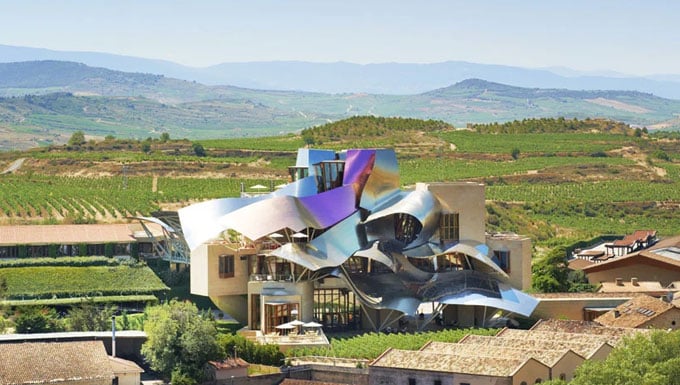 It all began in 1858, when Camilo Hurtado de Amézaga, VI Marqués de Riscal decided to set up his own project in some winery buildings he had inherited from his father in the town of Elciego (La Rioja). To do this, he hired the master winemaker of the prestigious Château Lanessan, Jean Pineau and began to use the revolutionary winemaking techniques that were being used where he lived, in Bordeaux. This was all pioneering and high-quality work that led to Marqués de Riscal becoming the first non-French winery to receive the Diploma of Honour at the Bordeaux International Exposition in 1895.

The Marqués de Riscal was a visionary, recognising the innate qualities in Elciego and knowing how to make the best of it. The great viticultural contributions they brought to the industry at the time revolutionised the City of Wine. They introduced new methods in the vineyard and in the winery that are here to stay, and that have transformed the D.O.Ca Rioja into what it is today.

One of the new things Marqués de Riscal was responsible for was planting foreign vines in Rioja. The noble French varieties Cabernet Sauvignon, Merlot, Malbec and Pinot Noir were able to adapt very well to a very varied climate and clay-calcareous soils.

In the winery, they pioneered the use of wooden fermentation cones, 225-litre barrels and bottles lying horizontally. It was also the first winery to cover the bottles with a metal mesh, a symbol of prestige to guarantee that they were not filled fraudulently.

At the beginning of the 20th century, while other wineries were bottling wine on demand, Marqués de Riscal kept their bottled wine. A pioneering decision that helped the wine to refine led to this winery having one of the largest numbers of preserved old vintages in the world today.

In 1970, the company decided to go a step further and try to produce their first white wines in Rueda (Valladolid). They were so successful that they drew the attention of new winegrowers to the area and in 1980, they were already talking about a new Rueda Designation of Origin.   Finally, another of this winery’s great achievements has been their commitment to avant-garde architecture. The reconstruction of the old winery began in 2000 with a new building including the most advanced technology, the most modern design and the most elegant space for wine tourism. Designed by Frank Gehry, the man behind the Gugggenheim Museum in Bilbao, the building has been an icon of wine and a symbol of the non-conformist and visionary character of Marqués de Riscal since 2006.

Probably one of the most international Rioja wines, this is undoubtedly the flagship wine of Marqués de Riscal. Exported to more than 100 countries around the world, it is pleasant, fresh and elegant, which makes it popular wherever it goes.

A pioneering winery in the discovery of the Verdejo variety’s potential in the D.O. Rueda, this wine is a benchmark of their work. Verdejo is versatile grape with great character and personality that has produced this aromatic, refreshing and unctuous wine.

This is one of the most spectacular Marqués de Riscal cuvées that is only created in the best vintages. Made from the winery’s oldest vineyards in Rioja Alavesa, this is a concentrated, powerful and highly expressive Rioja wine.

Marqués de Riscal holds onto its style without being left behind. And this is clear to see in Finca Torrea. This is the winery’s most modern wine with a marked fruity character, a characteristic it gets from a shorter but equally elegant aging.

Rueda does not live on Verdejo alone, and this single-variety Sauvignon Blanc is proof of that. The truth is that Marqués de Riscal was also a pioneer in planting this French variety in Valladolid and thanks to how they cultivate it, year after year, it produces a fresh, clean and very aromatic wine.

Although these are the best known wines from the oldest winery in the D.O.Ca. Rioja, it doesn’t end there. If you want to get your hands on the latest Marqués de Riscal wines, visit Decántalo and they could be delivered to your door in no time.