Following the course of the Douro River, a river of great wines

From its source in the Picos de Urbión, in the Spanish province of Soria (Castilla y León) to its mouth in the Portuguese city of Oporto, the Douro River runs for 897 km, no less. A long journey that creates impressive natural riches. From this river, the Romans extracted gold, and its banks produce wines of excellent and well-known quality, thanks to the character and qualities that its presence brings to the vineyard. Here are the different wine regions that you can enjoy today in the Douro: 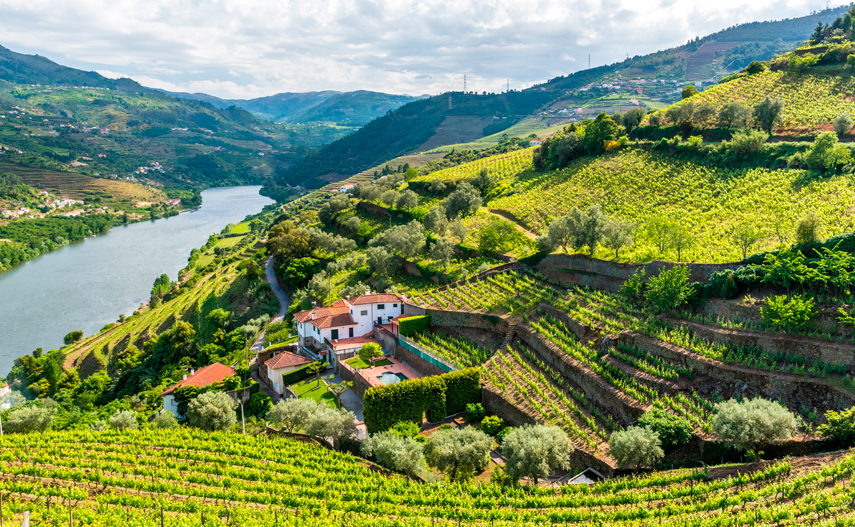 Denominations of Origin in the Spanish Douro region

The Duero River runs for 572 km through Castilla y León, so most of its basin is found in this central Spanish region. So it’s not surprising that there are some great, world-renowned Denominations of Origin around here.

This denomination includes vineyards in Castilla y León (Spain), on the northern plateau, specifically at the meeting point of the provinces of Burgos, Segovia, Soria and Valladolid. A relatively young denomination (created in 1982) but with a magnificent international reputation thanks to the quality of its red wines made mainly with the Tinta Fina variety.

The name comes from its main hub, the municipality of Cigales, and is made up of thirteen municipalities spread between Palencia and Valladolid. This denomination specialises in rosé wines and although it became a Classified Denomination of Origin in 1991, its wines have already made a name for themselves among claret lovers.

In the middle of the great Duero Valley, Rueda is known for its white wines made from the native Verdejo grape variety. A large wine-growing area that, thanks to the limestone terrain and its strong temperature contrasts, has allowed Verdejo to reposition itself as a grape still in fashion.

Leaving Valladolid and moving to Zamora, the D.O. Toro has managed to make a name for itself. By using the same varieties as Ribera del Duero (mainly Tempranillo, Tinta de Toro), this denomination has managed to transform the reputation of its hard and rough wines into elegant red wines with their own personality.

At the end of the Duero River on the Spanish side, it flows into the provinces of Salamanca and Zamora. This is where we find the small and young D.O. Arribes. Created in 2007, it covers red wines as well as rosé and white wines. This is an area with a very rugged landscape and a unique microclimate to provide the unique character of its wines.

Denominations of Origin in the Portuguese Douro region

In Portugal, the Douro river runs 213 km before reaching the sea and, as its name ouro (gold) suggests, this old river is undoubtedly synonymous with wealth thanks to its huge volume, the beautiful landscapes it irrigates and, of course, the quality of its wines.

This winegrowing area covers the sub-regions of Baixo Corgo, Cima Corgo and Douro Superior, located in the north of the country, around the Douro River. These are the most rugged parts of the Portuguese area known for the poverty of its slate soils and the production of fine and rich red and white wines.

In Oporto, one of the most representative cities of Portugal, the water of the Douro flows into the Atlantic and it is on the banks of this river where the famous Port is produced. This is a fortified wine with a high alcohol content and unprocessed sugars, which is a delight on the most exquisite palates.

Now we’ve given you a brief tour of the Douro river’s course, the only thing left to do is to try the wines. As the saying goes, when the river flows, the wine flows (there is no smoke without fire) ;)