A creamy, expressive, vibrant Ribeiro with a personality of its own

Masanobu Fukuoka is the father of natural agriculture. This trend claims that traditional agriculture is harmful to the land and the environment. The solution to all this is found in the Wu Wei doctrine (translated as 'non-doing') where common farming practices are abandoned, such as plowing (the soil should always remain in its natural state without altering its micro-ecosystem), fertilizer, pruning (plants grow according to their needs of space and light) or the use of herbicides and pesticides (they not only kill unwanted insects and weeds, but also eliminate the beneficial ones).

Under these premises, Bernardo Estévez Chánselus Castes Blanco came into existence, a wine elaborated by Bernando Estévez in the D.O. Ribeiro (to the northeast of Ourense, Galicia) from different varieties native to the area.

The grapes used to make Bernardo Estévez Chánselus Castes Blanco come from several vineyards in the San Amaro and San Vicente de Arnoia valleys, with vines between 20 and 100 years old. Traditional varieties which fell into disuse but are being recovered, such as Treixadura (queen of the DO Ribeiro ), Godello, Silveiriña, Lado and Loureira, are grown there. These grapes - grown in the shelter of the Suido mountain range and in the valleys of the Miño, Avia and Arnoia rivers - grow in a Mediterranean climate with a slight Atlantic influence.

Once in the winery, Bernardo Estévez Chánselus Castes Blanco develops with spontaneous fermentation and is aged for 9 months in French oak barrels. Finally it’s bottled without filtering. In all its purity. Ideal for getting to know the great grape legacy of the D.O. Ribeiro.

Real reviews from customers who have purchased this product
18543

Bernardo Estévez Chánselus Castes Blanco 2018 is a creamy wine made from varieties such as Treixadura, Lado, Loureira, Albillo, Godello, Silveiriña and Verdello(Verdejo). The nose is intense, revealing aromas of white fruit, flowers and fennel. On the palate, it’s fresh, with a very long finish and good acidity, highlighting notes of almonds, vanilla and peach.

The resurgence of the Ribeiro of yesteryear 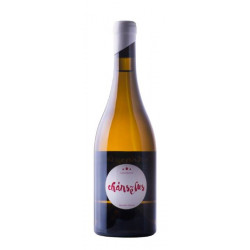