Muster Gräfin is an organic, biodynamic and natural orange wine made by Sepp & Maria Muster with the Sauvignon Blanc variety in the Austrian region of Weinland Österreich, in Steiermark.

Sepp & Maria Muster are a winemaking couple who are known in the wine industry as pioneers of biodynamic agriculture. They work on a 10-hectare family estate in southern Styria, near the Slovenian border, with a philosophy of “less is more”, letting the wine evolve naturally to preserve the intrinsic vitality of the grapes.

In 2000 they began to implement biodynamic agriculture in their vineyards and in 2003 they were awarded Demeter certification. This certification was not difficult for them to gain on an estate where herbicides and pesticides had never been used. The Muster Gräfin wine comes from 30-year-old vines planted in limestone and clayey silt, known locally as opok. All their work is organic and follows the astronomical calendar.

In the winery, half of the grapes used to make Muster Gräfin are destemmed. Then all the grapes are placed in 2,400-litre wooden barrels to undergo spontaneous fermentation with native yeasts and maceration with skins for 3 weeks. It is finally bottled without being filtered, clarified or adding sulphites.

Muster Gräfin is a magnificent and very aromatic biodynamic wine made by macerating with skins, in the home of orange wines. As its own creators say, this wine is born between the earth and the sky.

Muster Gräfin 2017 is an intense and concentrated orange wine with aromas of dried stone fruit and orange peel on the nose. On the palate it is dense, round and exuberant. A fine and elegant wine with refreshing tannins and a firm structure. It develops well in the bottle and can age up to two decades.
Alcohol: 13.00%
Production area:

The most eccentric orange wine 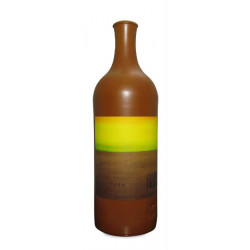