If there is something that characterised the Cañas family since the very beginning is perfection, dynamism and curiosity. Their viticultural origins date back to over two centuries ago, although the first family winery was founded in Rioja Alavesa in 1928. However, it was not until 1970 when Luis Cañas printed his name on the label of his ‘harvester's wine’ (vino de cosechero). From this date onwards, this winery from Rioja gradually experienced a rise in marketing, and started to develop what is nowadays one of the exemplary wineries of our country. Juan Luis, his son, is currently one of the most curious and innovative winemakers. The experience and know-how of the winery team have made it possible for their wines to be recognised with the most prestigious national and international awards. In 2008 arose the new challenge of making great wines in an exceptional land, Ribera del Duero. This land was visited many times by Juan Luis until he found his dream vineyards; old vineyards, some of them century old, old vines, with scarce production, but with a generous character to provide the best of themselves in each bunch.

The Cañas family, specifically Juan Luis, have always believed that to create a great wine you need a great land. Based on this, he created Bodegas Dominio de Cair, a modern winery with an avant-garde architecture, where nothing is left to chance. The Dominio de Cair project is the culmination of a project planned in the surroundings of La Aguilera, a small town in the heart of Ribera del Duero in the Burgos area. It is one of the few areas where the land consolidation did not interfere.

Since the very beginning, Juan Luis, the alma mater of the project, considered the option of carrying out viticulture according to the most significant integration elements, to be able to conceive and personalise their wines from the vineyard itself. With this premise, he created the need to acquire full knowledge on the nature, the area and its environment. All the senses were involved: search, methodology, innovation and tradition, all with the aim of extracting the maximum identities from the terroir and the fruit. Three years were needed to study the growth cycle of the oldest vineyards from the surroundings of La Aguilera, Quintana del Pidio and Moradillo de Roa, some of them eighty years old, and to locate the best plots of Tempranillo, strategically distributed at different altitudes, in different micro-climates and soils.

In the winery, everything is shiny, new, aseptic, functional. It is designed to work by gravity, with selection tables for bunches and grapes, and it has the most modern oenological techniques. Its warmest spot is found in its spectacular ageing room, that houses a stock of 1,300 American and French oak barrels.

The winery has approximately 110 hectares, distributed among their own vineyards and controlled ones. They are located between 800 and 950 metres above sea level, on clayey-calcareous, sandy and gravelly soils in the municipalities of La Aguilera, Quintana del Pidio, Gumiel de Mercado and Moradillo de Roa. All the vineyards are carefully controlled with a rational viticulture that is respectful with the environment during the entire growth cycle. This enables them to leave only the best bunches on the vines.

The winery currently makes four red wines, Cair Cuvée, Cair, Tierras de Cair and their new wine, Pendón de La Aguilera. However, their open-mindedness also allows them to apply a distinguishing philosophy that stands before the most conservative and traditional inertia of the region. In short, it is a way of doing things that shows the commitment to quality that Dominio de Cair implement to become integrated in the selection dynamics required today by the best wines of Ribera del Duero.

At Dominio de Cair, apart from having a large vineyard, they also firmly believe in selection. To do this, they study each plot to decide on the optimal time to pick the fruit and their destination. They harvest the grapes in small boxes for a perfect transportation to the winery. There, they are received and introduced in a cool chamber, where they can perfectly control the temperature and humidity, which is essential. The bunches are checked on a double selection table. On a first table they manually select the bunches, and on the second one, they select each one of the berries. Then, only the ones that are in perfect condition can continue the process for the vinification.

The modern facilities have been designed so that the production of the wines is carried out in the best conditions. To do this they use oak vats and stainless steel deposits of small capacity. For the ageing of the wines they have the best selection of new French and American oak barrels, from the most recognised cooperages in the world.

Below is a list of the wines produced by the winery Dominio de Cair:

Cair Cuvée is made with 85% Tempranillo and 15% Merlot from vineyards that are between 20 and 25 years old. It is aged for 9 months in barrels that are between 1 and 3 years old, except for the Merlot, which is aged in new French and American oak barrels. We must point out that the Merlot comes from Moradillo de Roa, a plot located at 950 metres of altitude.

Cair is a varietal of Tempranillo that comes from plots that are 40 to 60 years old, all trained in vase-shape. Each year it is aged in new French and American oak barrels. The ageing starts with the malolactic fermentation in these new barrels, for 14 months, 50% French oak and 50% American oak.

Tierras de Cair is the expression of the land of the different plots of Tempranillo. To make this wine they select plots that are over 60 years old, with very low yields, in high and poor areas. They aim to show the concentration and the potential of the old vines of the area of La Aguilera. The alcoholic fermentation takes place in wooden vats. Then, the malolactic fermentation and the ageing are carried out in new French oak barrels for 9 months, 60% in French oak and 40% in American oak, with an average age of 1 to 3 years. It spends a minimum of 6 months in the bottle.

Pendón de La Aguilera refers to the flag or standard that the lances of the feudal lords and their militias used to have in the Middle Ages. During the Late Middle Ages (centuries XIII to XV) the King used to grant towns and cities a banner, which became their pride and symbol. Dominio de Cair is located at the foot of the cross of El Pendón de la Aguilera, located on a hill at the highest part of the town that houses our winery and where the distinctive element could be seen. This wine has its name and it is the standard of the winery. It is made with Tempranillo from old vines of an average of 80 years old. The harvest is carried out manually in 11-kg boxes, and the bunches and berries are chosen on a double selection table. The alcoholic fermentation takes place in 7,000-kg vats made of French oak. The malolactic fermentation takes place in new barrels, and the ageing then takes place for 27 months in new French oak barrels. 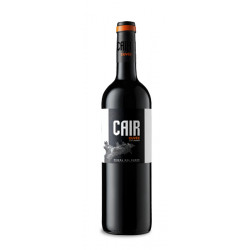 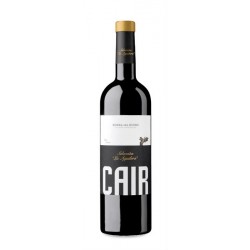 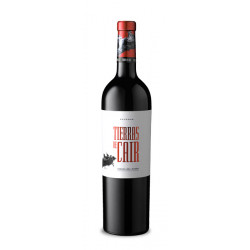