The elegance of Bordeaux at an affordable price

Lynch Réserve Rouge is a red wine, barrel made by Michel Lynch with the Merlot and Cabernet Sauvignon varieties at AOC Bordeaux Supérieur.

Michel Lynch was a man who dedicated his life to improving the wines of his Château Lynch-Bages and was one of the main figures of winemaking progress in the late 18th century. Techniques such as de-stemming before fermentation are the result of his studies. Under his name, the current owner of Lynch-Bages, Jean-Michel Cazes pays tribute to him with a selection of wines which reflect the soul of Bordeaux.

Ambassador of the northern and southern terroirs of the Garonne river, Jean-Michel Cazes captures the diversity and richness of the Bordeaux terroirs in this Lynch Réserve Rouge wine. For this, the vines enjoy a temperate oceanic climate and their soils are mostly calcareous clay, with sand and gravel. Harvest is carried out manually at the optimum point of ripeness.

As a result, Lynch Réserve Rouge is the fruit of a cuvée which combines the best of the Merlot and Cabernet Sauvignon varieties in equal parts. A true art in the mixing process which involves testing, experimenting and adjusting until the aromas, balance and flavor of the wine are perfect. The two varieties are fermented separately and aged in French oak barrels.

Lynch Réserve Rouge came into being from the union of the tradition and modernity of Bordeaux wines. Elegant, rich and accessible, it’s an authentic celebration of fruit, for both amateurs and connoisseurs.

Real reviews from customers who have purchased this product
9216

Lynch Réserve Rouge 2016 is a juicy red wine with aromas of violets, black cherries and mocha. On the palate it is generous, fresh and very fruity.
Alcohol: 13.50%
Production area: 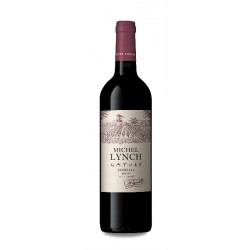