Izadi Larrosa Blanca is a young white wine made from the Garnacha Blanca variety in the D.O. Ca. Rioja by Izadi.

Located in the triangle formed by the towns of Villabuena, Samaniego and Ábalos in Rioja Alavesa, Izadi ('nature' in Basque) is the wine project of a group of friends and entrepreneurs to bottle their beloved natural environment. Today it’s part of the great Artevino group.

In the cellar, the Izadi Larrosa Blanca grape is de-stemmed and goes through a gentle pressing. The must obtained then ferments in stainless steel tanks at a controlled temperature. Finally, the wine is clarified and filtered before bottling.

Aiming to give visibility to the area’s native varieties, Izadi Larrosa Blanca is a monovarietal Garnacha Blanca: fresh, fruity and very intense.

Real reviews from customers who have purchased this product
20470

A bouquet of native white varieties 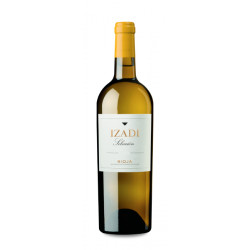