A great Toro wine that is spicy, structured and with a silky tannin

Almirez is a red wine from Toro produced by Bodega Teso La Monja, en Valdefinjas, Zamora. This winery was founded by the Eguren family, who also own the emblematic winery Sierra Cantabria in La Rioja.

They have 92 hectares, some of the vineyards are pre-phylloxera and have been subjected to a harsh continental climate for more than 130 years, with hot summers and very cold winters, shown in the opulent character of their wines. The land is cultivated in a manner that respects the environment and the atmosphere, with as few interventions as possible when working the earth. They avoid using herbicides or systemic products.

The grape comes from different vines with an average age of 15-65 years. It is harvested manually and the first selection is carried out in the vineyard, then a final selection is completed later on a table in the winery.

Fermentation takes place over 8 days at a controlled temperature and it is left to macerate with its skins for 8 more days. 30% of the wine undergoes malolactic fermentation in new French oak barrels and the rest in stainless steel tanks. The ageing of Almirez extends over 14 months.

Almirez is a structured red wine, fruity with a dry tannin that will please lovers of concentrated wines.

The climate year in Toro was the same as its close neighbors in Ribera de Duero: hot and dry. With one big exception: they didn’t suffer the tragic frost of April 28. The spring began with high temperatures resulting in early budding, and later a sudden drop in temperatures caused the slowdown of the growth cycle again. The late spring and early summer suffered high temperatures that advanced the cycle. In late July and August, temperatures eased up and some precipitation ensured the water reserves until the end of the harvest, improving acidity and giving fruitiness to the wine.
In this excellent vintage Almirez 2016 stands out for the finesse and fluidity within the region. It has a character that is typical of Eguren wines, where the small notes of its aging give way to the spicy and fruity flavour of the Tinta de Toro variety. A great year for the baby of the family.
Almirez 2015 stands out inside the region for its fluidity. It has a character that is typical of the Eguren, where the small notes of its ageing give way to the spicy and fruity flavour of the Tinta de Toro variety. A great year for the little one in the family.
The vintage began with a rainy autumn and low temperatures that produced frost for days in a row in December. At the beginning of March, temperatures began to recover and at the beginning of April, the start of the growth cycle was already visible. Due to the persistence of high temperatures, the growth of the vines took place faster, bringing forward the flowering. In June, temperatures dropped but in July they increased significantly, causing the dehydration of some berries. In August and early September the weather evolved normally, until the arrival of the harvest.As a result, we have a year with wines of good body and acidity. Fluid wines in their youth and with a good ageing capacity.
The 2013 vintage, rated as a very good one, began in a complicated way. In the early spring, in April and May, temperatures were low and there were heavy rains, significantly delaying the start of the growth cycle. This resulted in late flowering and therefore later ripening. Before the harvest, there was a considerable amount of rain, which produced an interspersed harvest.After a cold and rainy year, the profile of the wines they have produced are less concentrated than usual. Fresher and with a good acidity.
Sight Beautiful and very lively cherry red colour with violet reflections. Clean and very bright wine with a high robe. Its tears stain the glass. Nose Highly fruity. In the nose, the notes of red fruit (blackberries and raspberries) take centre stage and gain in intensity and ripeness as the wine is aerated. Its abundant notes of spices, coffee, chocolate and vanilla are released along with some hot spices and subtle mineral nuances. Elegant background with toasted and smoked notes. Taste A red wine with a very bulky and pleasant attack and a tasty and fleshy mid -palate, extremely refined and elegant and with a silky texture. A fruity, full-bodied and bulky wine, with polished tannins. Good, refreshing and integrated acidity. Very balanced. Long and persistent finish with fruity, spicy and balsamic sensations. A round, pleasant and elegant wine from Toro.
Sight Intense and beautiful cherry colour with purple reflections. High layer and tears that stain the glass. Nose Very fruity wine. The notes of red fruit take centre stage and gain strength and maturity with aeration. Many notes of spices, coffee, chocolate, vanilla, some spicy and subtle mineral hints are also felt. Elegant background of toasted and smoked notes. The wood is very well integrated since it does not hide the notes of fruit, and a wine that is the ultimate expression of the grapes is achieved. Taste Wine with a soft and very nice attack. It has a tasty and creamy mid palate and a silky texture. It is a fruity, well bodied and bulky wine. It has polished tannins, a good acidity and a good balance. Long and lingering finish with spicy and balsamic sensations. A very pleasant, round and slightly sweet wine from Toro that we will conquer us.

The winery Teso La Monja has become, despite its youth, one of the reference wineries in the area of Toro.
And thanks to the Eguren family, this winery produces highly renowned wines with the traditional strength of the Toro wines but also providing a very fine and elegant palate, common denominator in the wines produced by this family.

Other wines from the winery Teso la Monja 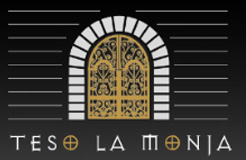