Vendrell Olivella El creuer Brut Nature is an organic cava made from Xarello and Maccabeu, from vines that are over 60 years old, planted on calcareous soils. They are manually harvested, and after a traditional winemaking process, they go through a second fermentation with an ageing stage of 40 months, leaving less than 2 gr of residual sugar per litre.

Real reviews from customers who have purchased this product
17301 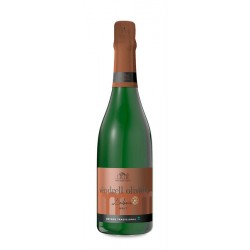