Áster is the dream fulfilment of the family of La Rioja Alta, made a reality in Ribera del Duero. Unique and exclusive wines, produced in exceptional vintages and with the accent of the modern wines of Ribera del Duero. A unique place that enjoys an undoubted potential for the production of wines, which are capable of transmitting, just as in the great "châteaux", the unique characteristics of a privileged land: serenity, elegance, terroir and timelessness.

For the opening of Áster, it took several years of work to find the most appropriate farm, counting on the advice of the old farmers of the region and the advice of viticulture professors. They studied and analysed the lands, the grapes and the climate of different sub-areas. Finally, it was in Anguix (Burgos) where the ideal location was established, starting with the Tinta del País plantations in 1988.

The first harvests were all sold, and it was the 1999 harvest the first to be used for winemaking, although in the end the quality parameters did not exceed the expectations of the winery and it was sold in bulk.

In 2000, after verifying the quality of the farm and its grapes, they began the construction of a winery that perfectly combines the highest production technology with a timeless and elegant aesthetic. Here, they created an idyllic park of 2,700 French oak barrels.
In that same year the first wine of the winery was produced and marketed: Áster Reserva 2000. Curiously, the winery opted to launch the reserva before an oak or crianza wine, pointing out from the beginning that quality and complexity was their first premise.

In 2001, after tasting the wines from the different plots, they saw that those from the farm El Caño, with loamy-calcareous soil, were complex and fruity musts, with a good degree and very suitable for the production of a crianza true the style of Ribera del Duero, which resulted in the Áster Crianza.

In 2005, the vineyard turned 15 years old and showed a clear maturity. This coincided with the new position of Julio Sáenz as the Oenological Director. He investigated in the parcelling of the farm, both in the production and in the ageing, starting to carry out the malolactic fermentation in barrels at an experimental level.

2006 was a turning point for the winery, and they decided to exclusively produce two "vinos de pago" (single-farm wines) with differentiated characteristics: Áster Finca El Otero, which was born in 2005, with grapes from the oldest farm, and Áster Crianza, with grapes that are optimal for the characteristics of a Crianza wine. Currently, they produce only two wines, Áster Finca El Otero and Áster Crianza.

Currently Viñedos y Bodegas Áster has 87 hectares of own vineyard, and 100% of the grapes for the production of its wines comes exclusively from these vineyards. The vineyard is planted with an average altitude of 800 metres, with vines of an average of 16 years. Its average yield is less than 4,000 kg/ha.

They perform a manual harvest in 20-kg boxes, cold maceration, manual selection on tables, ageing in French oak barrels and malolactic fermentation in barrels for the Áster Finca El Otero. All the wines from the winery are racked by hand every six months with the use of candlelight.

The winery is equipped with state-of-the-art production technology and it allows a great oenological flexibility. The philosophy of the house is to produce only high-quality "vinos de pago" with the personality and the special character of Ribera del Duero, and an exclusive vineyard that, from harvest to harvest, continues to demonstrate its incredible potential.
In general terms, wines from Áster are consistent, elegant, full-bodied and fruity. Áster Finca El Otero, the "top" wine of the house, is characterized by its authenticity, minerality, power and balance, while Áster Crianza stands out for being balsamic, spicy and elegant.

Áster Crianza is made 100% with Tinta del País from their own vineyards in Fuentecojo, Otero Joven and La Cueva, which surround the winery in Anguix, located on loamy soils and with an altitude of around 780 metres. 80% of the wine goes through the malolactic fermentation in French oak barrels, with weekly batonnages for two months. The ageing was carried out for 22 months in new French oak barrels (70%) and the rest in two-use French oak ones. On the nose it shows intense notes of wild berries and ripe fruits, which envelope a rich balsamic background, sweet spices, cocoa, liquorice and soft aromas of fine herbs. In the mouth, it impresses by its strength, nerve, soft acidity and balance, with soft tannins, tamed, round.

Áster Finca El Otero is also made 100% with Tinta del País from El Otero in Anguix. After the maceration, the wine was transferred to new French oak barrels, where it completed its malolactic fermentation for three months with a weekly batonnage of the lees. Next, a selection of the best barrels is performed and, after a new homogenisation, the wine is transferred to new French oak barrels for 15 months, with two racking through using the traditional method.  Very powerful aromas, with notes of ripe black fruits that give way to balsamic and spicy notes, together with soft toasted nuances of toffee and mocha. In the mouth it is tasty, powerful, with a lot of structure, balanced in acidity and alcohol, with marked tannins, but round and polished that give it a great mid-palate. Its long and harmonious aftertaste is marked by minerality and pleasant spicy and black liquorice nuances.

The English magazine The Wine Merchant awarded its prize Best Red Trophy to Áster Finca El Otero 2012, which was launched on the market in September of 2016 with a renewed image. This prize was granted after an independent blind tasting carried out by the main specialised stores in the United Kingdom, with the participation of 500 references from around the world. 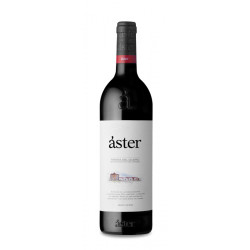 A combination of softness and strength 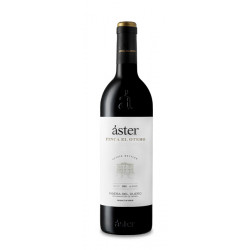