Eulogio Pomares, prime mover of Zárate, is the alma mater of Fento Wines, a family-run winery that began its journey in 2012 with the clear objective of making Galician wines with a modern style, and with maximum respect for the natural surroundings and tradition.

They advocate for local varieties, indigenous to Rías Baixas, giving great importance to the vine-soil-climate-wine grower group, as a whole. They work with small wine growers that share the philosophy of rational work and respect for the environment.

The vines are located in the province of Pontevedra, in different subareas like Valle de Salnés or Condado de Tea, in D.O. Rías Baixas. Vines are planted on "Xabre" soils, a name given traditionally to sandy soils with weathered granite. Their vines are trained in the pergola or "emparrado" style.

Fento Blanco is a wine made from Treixadura, Albariño, Loureiro, Godello and Torrontés from vineyards at sea level planted on mica and silicate soils. Harvest is performed by hand and grapes ferment in stainless steel deposits at a controlled temperature with their skins. After stabilising and filtering, the wine is bottled.

Fento Blanco 2017 is a fresh, light and fruity wine. This vintage stands out for its citrus white fruit aromas and its mineral notes on a light salty background. Pure Atlantic.

A fun, easy to drink Albariño 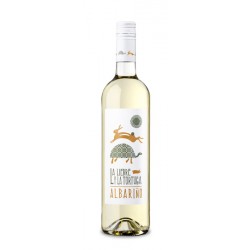