A nice sparkling wine from Rioja

Haro is one of the most interesting cities in La Rioja, known for its great artistic and cultural heritage. The old town was declared an Asset of Cultural Interest in 1975. As well has being full of beautiful palaces and churches, it has a population of 11,557, and is very famous for its wine. In Haro, wine is not just a tourist attraction, but is, in fact, the best way to understand the local people and their way of life.

The area is home to a large number of wineries, both professional and private, including Muga, one of the best known and most emblematic of the D.O. Ca. Rioja. This company, which is currently the only one in Spain with a master cooper and three coopers of its own, was founded in 1932. And since then, their wines have reached the highest levels of quality, with one example being Conde de Haro Brut Vintage.

The Conde de Haro Brut Vintage cava pays tribute to Pedro Fernández de Velasco, a nobleman and member of the Royal Council at the end of the 14th century who received his title from John II as a reward for defending the town of Haro. Blanca of Aragon, queen and wife of Juan II, invaded Castile through the Henares valley to promote the interests of her brothers, the princes of Aragon.

As the name suggests, the Conde de Haro Brut Vintage grapes are grown in Haro itself, in plots located in Sajazarra, Cellorigo and Fonzaleche, in vineyards lying at an altitude of 500 metres above sea level. From these north-facing vines, the grapes are less exposed to the high summer temperatures of the Atlantic and continental climate, so the berries, which are manually harvested, maintain a significant level of acidity. Conde de Haro Brut Vintage reaches the winery in cases of about 15 kilos. When they get there, the bunches are selected and pressed, and the must is placed in 1000-litre wooden vats. Following a first fermentation, the wine remains on its lees until the beginning of April and is then bottled. This is the point where the liqueur de tirage (made with yeast and sugar) is added, leaving the wine ready for its second fermentation (for 3-4 months at a controlled temperature). The bottles are rested horizontally, which is known as the rima phase, and this lasts for 18 months, until the bottle is disgorged and the lees or dead yeasts from this second fermentation are removed. The finishing touches to Conde de Haro Brut Vintage include adding expedition liqueur (one of the best kept secrets of each winemaker) and putting the cork in.

Real reviews from customers who have purchased this product
20728

Conde de Haro Brut Vintage 2018 is a dry sparkling wine (less than 12 g/L of sugar). The nose is elegant and light, with aromas of apple, notes of white flowers and hints of biscuit. The palate is elegant and refreshing, with creamy notes and a very moderate acidity.

On the palate it is sweet and fresh. Great acidity. An aftertaste where the fruits return with a great dominance of spices.

On the nose it is predominately acidic fruit and flowers. Notes of honey, vanilla and liquor.
Alcohol: 12.50%
Production area:

Muga is one of those few wineries in Rioja that has managed to combine the most absolute family tradition with a renewed vision of the future. This has allowed them to maintain the unique character and personality of their wines. In addition, it is one of the few wineries in La Rioja that uses oak wood from its own cooperage in all the stages of the production and the ageing processes. An exemplary winery, and one of the most prestigious ones in La Rioja. Since the very beginning, harvest after harvest, it makes wine with the family seal: “Muga style”. 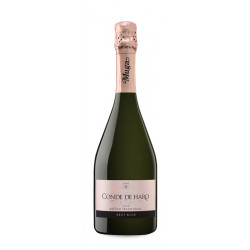