Wine routes to explore Cádiz in a different way

If there is one thing that everyone loves about Cadiz it’s the wonderful beaches. Dreamy landscapes, breathtaking sunsets and fine white sand are some of the things the hundreds of tourists come in search of, year after year, in Andalusia’s southernmost province in the south of Spain. 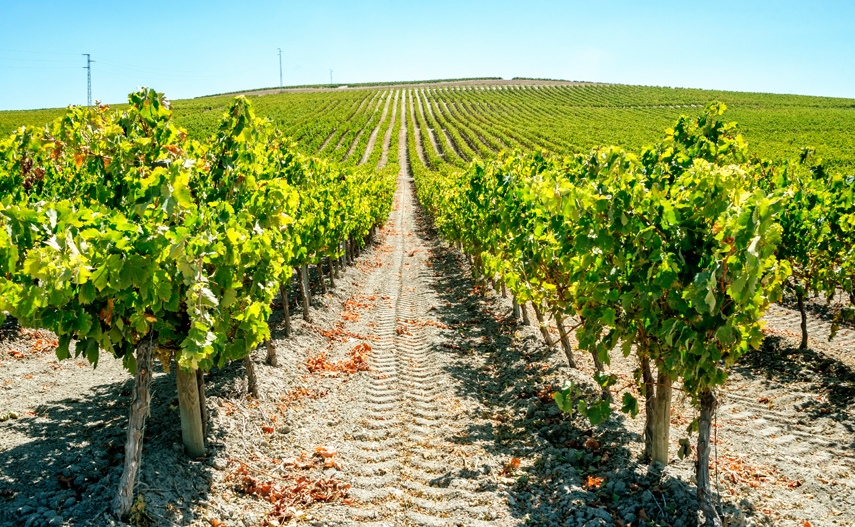 However, without detracting from its 260 km of coastline, Cadiz has other charms, like its wines and wine routes. As the American novelist Henry Miller said, “our travel destination is never a place, but a new way of seeing things.”

If you love Cádiz and you think you know everything about this place, you might be wrong. Here is a selection of the best wineries to show you a different side to the province.

Would you like to feel like the actors Blanca Suárez and Javier Rey in the movie “El verano que vivimos”? Then you should start with Bodegas González-Byass.

In 1835, when he was just 25 years old, Manuel María González bought this bodega in the heart of Jerez de la Frontera, and named it Tío Pepe in honour of his uncle (who had taught him all about the Sherry industry). This is how the most famous Fino wine in the world was born, and it is still made in these cellars, where the movie was filmed, and where every corner is full of stories and anecdotes.

Within these walls you can find the unique Calle Ciegos (considered one of the most beautiful streets in Spain), or the circular cellar of La Concha (built in iron and opened in 1862 during a visit from Queen Isabella II).

With a production of 15 million bottles, González-Byass is still a reference point for new experiences, with the restaurants in its gardens, the “Tio Pepe Festival” concerts and the Bodega Tio Pepe hotel (thought to be the first Sherry hotel in the world).

Not to be missed: a swim in the hotel pool with views of the cathedral of Jerez from the terrace, accompanied by a glass of sparkling Croft Twist or a dry Alfonso Oloroso.

One day, José Estévez, owner of Grupo Estévez, asked Victoria Frutos Climent, winemaker at the Real Tesoro winery, what would happen if the Genome Music project was applied to her wines.

According to the information on the website, this research, led by Dr. Aurora Sánchez Sousa, head of the Mycology Unit of the Ramón y Cajal Hospital, studies how to transform and transcribe the genetic sequences of the flor yeasts used for biological aging into musical notes.

“When she approached me, I told her it should be fine. The music wouldn’t affect the wine,” Victoria says with a shrug. Since then, the silence in the cellars has been broken by melodies that play at certain times.

“However, he went one step further and had his own DNA sequence transcribed as well. That means, every day, before the usual pieces made with the yeast sequence, the first melody that plays is his. It’s a way of staying present, even though he’s no longer with us,” says Victoria. Undoubtedly, a genius and a character.

However, these facilities are just one of the pieces in the great puzzle of this winemaking group, which also includes bodegas La Guita and Real Tesoro, whose facilities are divided between the cellars in Calle Misericordia, in Sanlúcar de Barrameda, and the facilities on the N-IV, in Jerez de la Frontera.

In the latter lies Inocente, the only Fino in the area made from only Palomino variety grapes from the Jerez estate of Macharnudo, one of the most sought-after.

There are also a few unique things about these wineries that are worth highlighting: fermentation takes place in 500-litre oak casks (the norm being fermentation in stainless steel tanks of up to 50,000 litres) and its 10 rows of criaderas (when there are normally only to 2 or 3).

“Wines are like people. At the beginning, in the first criaderas, it is like a child: it moves, it is restless, it is lively and has many sharp edges on the palate”, says Victoria. “Then, as time goes on, it becomes more and more calm, like an older person. This is why we decided to keep this number of criaderas and give it as much time as it needs.”

Not to be missed: a visit to the art collection and his stables, with more than thirty
Purebred Spanish black horses.

The best way to discover the real Palomino grape. This winery, located in Sanlúcar de Barrameda, is the best example of how things can be done differently. In one of your previous trips to Cádiz you have likely tried some wine made with Palomino grapes, the area’s typical variety. However, we can assure you that a sip of the wines made by Alejandro Muchada and David Léclapart will be completely different to anything you have tried so far.

Maximum expression of terroir and Palomino. This is how you could sum up this winery, one of the few in the area where the vines are cultivated according to the principles of biodynamic agriculture and the French school of good winemaking, where the Palomino grape, which has always been thought of as a neutral variety, produces rich and varied nuances. In one word: delicious.

For this pair, who met in France, high quality grapes are the basis of any wine (things have to be done right from the start). So they use grapes that come directly from the old vines planted in La Platera, Miraflores Alta and Camino del Puerto, three estates located between Sanlúcar and Chipiona, very close to the Atlantic Ocean and facing west.

Not to be missed: during your visit, take a walk with Juan Peregrino, the vineyard overseer, who claims to be the same age as the vineyard. At more than 80 years of age, he is a walking encyclopedia. One of the few living testimonies left in the area.

If magic can happen anywhere, it must be Barbadillo. These wineries, founded by Benigno Barbadillo and Manuel López Barbadillo on their return from America in 1821, are the result of significant expansion over the years. Most of the facilities, located in the Barrio Alto Sanluqueño, belonged to the Church and were acquired during the confiscation of Mendizábal. Some workers are sure that certain corners still hide the dungeons where the clergy locked up the defaulters who refused to pay their tithe.

Now, 200 years later, these unique wineries have become a symbol of Sanlúcar. Within its walls lies La Arboledilla, one of the largest cathedral cellars in the province, home to 1,500 resting barrels. Oenologist Montse Molina knows them all inside out, and she is perfectly able to decipher the secrets of this temple where the Levante and Poniente play with the wines: the same barrel, with the same must, but bathed in different winds, produces two totally different wines.

While the clarity and freshness of the Poniente makes the wines more delicate, fine and less heavy on the palate; the rebelliousness and strength of the Levante, which blows in a much darker and wetter corner, gives a much more powerful wine with character. A miracle and mystery that can only happen in Sanlúcar.

Not to be missed: a visit to the San Guillermo winery, part of the Barbadillo wineries,
and a former convent turned winery.

Enjoying all of these experiences is likely to leave you with the post-holiday blues. The main symptoms of this are feeling very tired, even more tired than before you went, as well as feeling very melancholy and being desperate to go back. But you can’t blame us for that. Holidays are certainly for resting, but who could turn down this itinerary?